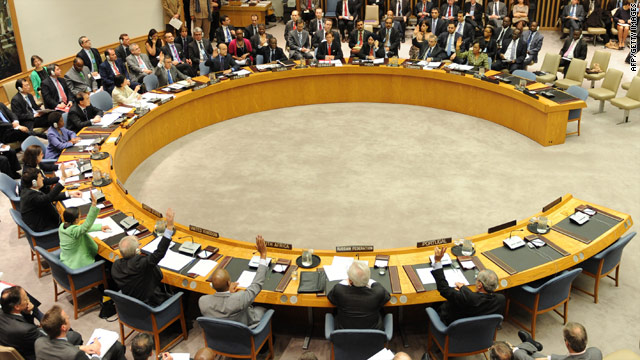 The U.N. Security Council approved a resolution calling for a no-fly zone in Libya and the use of "all necessary measures" against forces loyal to Moammar Gadhafi.
March 17th, 2011
08:24 PM ET

What a no-fly zone, other Libya measures would mean

The U.N. Security Council on Thursday evening voted to authorize a no-fly zone over Libya and to “take all necessary measures” - without using an occupation force - to protect civilians and population centers under the threat of attack in Libya.

Diplomats warned that action was needed to halt Libyan leader Moammar Gadhafi's rapid advances against rebel positions in his country.

The broadly worded resolution would seem to leave open the possibility that air forces implementing the no-fly zone may not only prevent Libyan military aircraft from flying, but also target Gadhafi’s wider ability to wage war.

“We’ve been told by diplomats this could certainly indeed move the door so that you have a more of a robust military approach – by the West, by Arab countries – to help the rebels and stop Col. Gadhafi from reaching Benghazi,” said CNN’s senior U.N. correspondent, Richard Roth.

“The next step is really not here anymore at the U.N. It is going to be decided elsewhere [by U.N. member states] whether there are planes flying and ships moving to counter Col. Gadhafi’s military advance,” Roth said, adding that it wasn’t clear when the establishment of the no-fly zone would happen.

Here is what Thursday’s resolution authorizes:

The authorization establishes a ban on all flights in Libyan airspace to help protect civilians. The exceptions are:

- Flights by U.N. member states for the purpose of enforcing the flight ban

- Humanitarian flights (such as those delivering medical supplies, food and humanitarian workers)

- Any flights “which are deemed necessary” by nations enforcing the no-fly zone.

U.S. military officials have said that a no-fly zone would typically be enforced by fighter jets.

A no-fly zone could cost up to $300 million a week, according to data obtained by CNN’s Barbara Starr.

In addition to the no-fly zone, the resolution authorizes member states “to take all necessary measures … to protect civilians and civilian populated areas under threat of attack in the Libyan Arab Jamahiriya, including Benghazi.”

However, the resolution prohibits "a foreign occupation force of any form on any part of Libyan territory."

Roth, reporting on CNN and CNN International, said that the exact composition of the nations that would participate wasn’t immediately clear. The Arab League's U.N. ambassador, Yahya Mahmassani, said two Arab countries would take part in a no-fly zone operation, but he was not sure which two.

U.S. Secretary of State Hillary Clinton said the United States would not act without a U.N. resolution. The United States has said it wants Arab nations to take part in no-fly zone.

Asked whether France will be involved in strikes against Libya if a resolution was passed, French Foreign Minister Alain Juppe said Thursday at the United Nations that "France is available with others to put the resolution in action, including in this domain."

Germany, one of five nations on the Security Council to abstain from Thursday’s vote, said it would not contribute any forces. The other nations that abstained from Thursday's vote were Russia, China, Brazil and India.