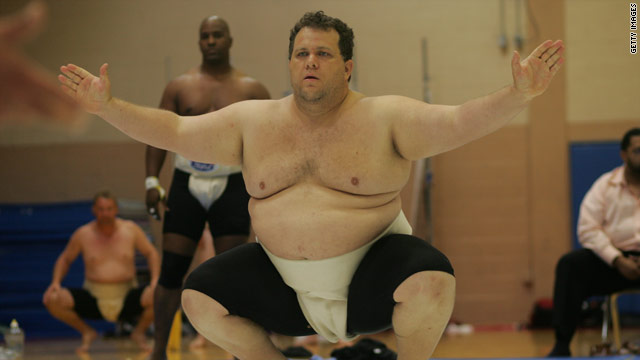 The 40-year-old sumo wrestler, who weighs 405 pounds and has a 60-inch waist, is training to run 26.2 miles in the Los Angeles Marathon on Sunday. Should he manage it, Guinness World Records is prepared to recognize him as the heaviest person ever to finish a marathon.

Gneiting took up sumo wrestling in the late 1990s and has won three U.S. championships. Running a marathon has been his goal since grade school, according to an article in the Los Angeles Times.

Gneiting lives on an Indian reservation in Arizona, the Times says, and has a master's degree in geography from the University of Idaho, according to a bio at nostringsattachedenews.com. His wife and five children live in Idaho.

"I honestly think I'm one of the best athletes in the world," he says.

The Martinsville, Virginia, mother is mourning her 21-year-old Libyan-American son, Muhannad Bensadik, who reportedly was killed while resisting Moammar Gadhafi's regime on the front lines in eastern Libya.

He was interviewed by CNN's Ben Wedeman on March 6 after rebels shot down a loyalist fighter jet.

According to CNN affiliate WSLS-TV, Elarabi traveled to Washington this week to demand the U.S. help topple Gadhafi, whom she calls a dictator, killer and gangster.

His father, Osama Bensadik, who is trying to recover the body, told CNN affiliate WSET-TV: "He died brave. He died for what he believed. He always said, 'Live free or die.' And you know, that's what happened to my son."

The sheriff of St. Bernard Parish, Louisiana, who was re-elected in 2007 as the parish was rebuilding from Hurricane Katrina, has announced that he will not run for another term this fall. Stephens took office in 1984 and is the longest-serving active sheriff in Louisiana, according to the Times-Picayune newspaper.

"I am confident that the leadership within the department, who served so proudly and courageously during our darkest hour, will continue their efforts to maintain the integrity of our community and to safeguard its residents," Stephens wrote in an advertisement Thursday in the Times-Picayune.

Stephens was a regular guest on CNN throughout the coverage of the storm and its aftermath.