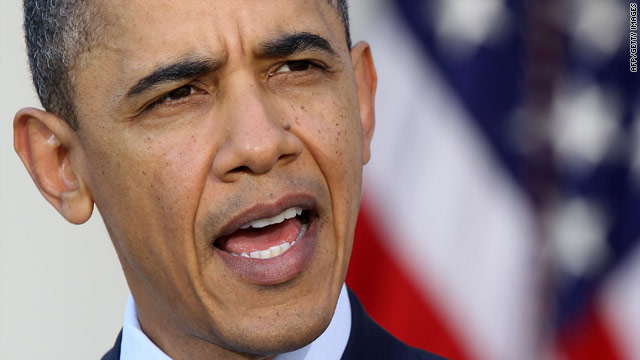 President Barack Obama says Libya must pull its troops out of its cities and restore utilities.
March 18th, 2011
02:37 PM ET

Obama lays out what he calls non-negotiable terms for Libya

President Barack Obama said Friday that "left unchecked, we have every reason to believe Gadhafi (will) commit atrocities against his own people" and the surrounding region could be destabilized.

"The democratic values that we stand for would be overrun" and the "words of the international community would be rendered hollow," the president said.

The focus of the United Nations is on protecting innocent civilians and holding Moammar Gadhafi accountable, Obama said.

A cease-fire must be implemented immediately, and Gadhafi's troops must be pulled back from several cities, he said.  Power and water must be restored to those cities, he declared.

If Gadhafi doesn't comply, the U.N. resolution will be imposed through military action. The United States will work as part of an international coalition, Obama said, but American troops will not be deployed in Libya.