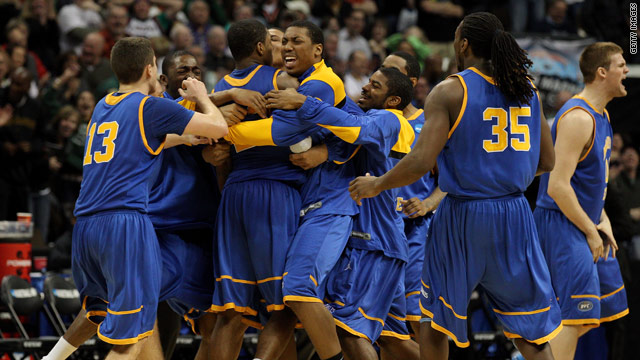 Delmonte Harper is mobbed by his teammates after hitting the game-winning shot to beat Louisville.
March 18th, 2011
11:49 AM ET

The NCAA Tournament lived up to its “March Madness” moniker Thursday, particularly in the Mile High City.

Three double-digit seeds pulled off stunning upsets in Denver alone, highlighted by No. 13 Morehead State’s shocking 62-61 victory over Louisville, the biggest victory in the program’s history. Twelfth-seeded Richmond held off No. 5 Vanderbilt in the closing seconds and Gonzaga, a No. 11 seed, rocked sixth-seeded St. John’s.

As if that weren’t enough action, both Temple and Butler pulled off buzzer-beating victories to snag vintage March Madness wins on Day 1 of the tournament. No. 4 Kentucky avoided maybe the biggest upset of the day with a late pressure-packed bucket of its own to slip past Princeton.

Madness, I tell you.

Thursday’s carnage has likely left your bracket in tatters, but a full slate of Friday college basketball should help ease the pain. Like Thursday, 16 games will be played today with the first game tipping off shortly after noon. SI.com’s Luke Winn recaps Thursday’s madness and tells you what to keep an eye on Friday.

You can watch all 16 games live throughout the day by clicking over to SI.com.

Here’s the NCAA Tournament’s schedule for the day (all times Eastern):

5 – Games Ohio State coach Jim Tressel requested he should be suspended, the same his players received, for his knowledge of a scandal involving team memorabilia being exchanged for cash and tattoos. SI.com’s Andy Staples explains why Tressel’s olive branch isn’t all that it seems.

8 – Consecutive wins for the Chicago Bulls after rolling to an 84-73 victory over the New Jersey Nets, who had won five straight games going into Thursday night’s game.

1,900 –  NFL players who received an e-mail Thursday from commissioner Roger Goodell outlining the league’s latest proposal to the players’ union to resolve labor discussions. Talks between the two parties broke off last Friday.