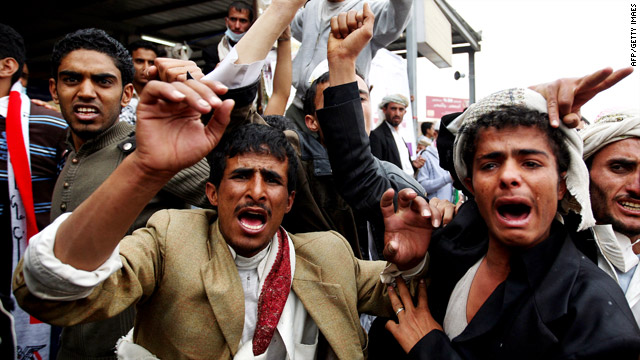 Yemeni anti-government protesters mourn the deaths of their comrades, who were killed in clashes with security forces Friday in Sanaa.
March 18th, 2011
11:16 AM ET

The president of Yemen announced Friday that a state of emergency has been declared in his country, according to two sources.

The declaration comes after at least 33 people were killed and more than 100 injured Friday in clashes between anti-government protesters and security forces in Yemen, medical officials said.

Yemen has been wracked by weeks of unrest, with thousands protesting the government of President Ali Abdullah Saleh.

High unemployment has fueled much of the anger among a growing young population steeped in poverty. The protesters also cite government corruption and a lack of political freedom.

A black truck with the name of a funeral home on it brought a stark and unexpected message to downtown Charlotte laâ€twitter.com/i/web/status/1â€¦47
cnni