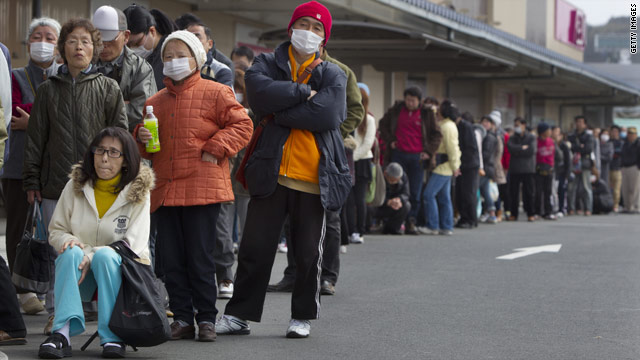 [4:35 p.m. Sunday ET, 5:35 a.m. Monday Tokyo] A U.S. radiation expert has said there's not much reason to worryÂ  despite restrictions on some food produced in two provinces around the Fukushima Daiichi nuclear power plant.Â  Japan slapped on the restrictions after high levels of radioactivity turned up in spinach and milk.

[3:54 a.m. Sunday ET, 4:54 p.m. Sunday in Tokyo] Japan's government hopes to decide Monday whether to ban consumption and shipment of agriculture products from the area near the Fukushima Daiichi nuclear plant, an official said.

Chief Cabinet Secretary Yukio Edano told reporters Sunday that authorities were analyzing data after finding radiation-contaminated milk and spinach near the plant. "We hope to reach a conclusion by tomorrow," he said.

[3:45 a.m. Sunday ET, 4:45 p.m. Sunday in Tokyo] The pressure in the containment vessel of reactor No. 3 at the Fukushima Daiichi nuclear plant has stabilized, officials said Sunday.

Tokyo Electric Power Co. officials told reporters that pressure was higher than previous levels, but that they had no plans to immediately release gas to relieve the pressure.

"We will continue to monitor the situation while making the necessary preparations," Chief Cabinet Secretary Yukio Edano told reporters.

The No. 3 reactor is one of six at the nuclear plant, where workers have been struggling to stave off a full meltdown since a 9.0-magnitude earthquake and ensuing tsunami knocked out cooling systems.

In earlier operations, they have let out radioactive steam in order to alleviate growing pressure inside affected reactors.

[12:58 a.m. Sunday ET, 1:58 p.m. Sunday in Tokyo] Japan's National Police Agency said Sunday that 8,133 people are confirmed dead and 12,272 have been reported missing following the 9.0-magnitude earthquake and subsequent tsunami that struck March 11. The agency said 2,612 people have been injured.

[12:15 a.m. Sunday ET, 1:15 p.m. Sunday in Tokyo] The pressure in the containment vessel of reactor No. 3 at the Fukushima Daiichi nuclear plant is increasing, Japan's nuclear safety agency said Sunday. The agency said officials are planning an operation to reduce pressure in the vessel - the steel and concrete shell that insulates radioactive material inside.

Late Saturday (early Sunday in Tokyo), the death toll was confirmed at 7,700 people, according to Japan's National Police Agency. An additional 11,651 people were missing and 2,612 were injured, the agency said.

The March 11 tremors shifted the Oshika Peninsula near the epicenter by just over 17 feet and dropped it by just over 4 feet, the Geospatial Information Authority in Tsukuba, Japan, reported Saturday. Those two land mass movements are records for Japan, according to government figures.

The global positioning system data from the Tsukuba University-based authority revealed the peninsula on the Pacific coast moved in an east-southeasterly direction toward the epicenter.

The quake also moved land masses in many areas ranging from the northeastern region of Tohoku to the Kanto region including Tokyo, the authority said.

Search and rescue efforts have been hampered by snowfall in the hardest-hit areas, said spokesman Patrick Fuller of the International Federation of Red Cross and Red Crescent Societies.

Construction of temporary housing for displaced people began this weekend with 200 units destined for the devastated coastal city of Rikuzentakata, Iwate Prefecture, The Japan Times reported. The prefabricated houses can accommodate two to three people and will be built on the grounds of a junior high school.

Hopes that mankind can save the northern white rhino from extinction appeared more remote than ever this week, afteâ€twitter.com/i/web/status/1â€¦QR
cnni

12:45 pm ET October 22, 2021 RETWEET
The risk for a severe weather outbreak is increasing for parts of the central US this weekend, with tornadoes possiâ€twitter.com/i/web/status/1â€¦SS
CNNweather

12:45 pm ET October 22, 2021 RETWEET
A dinosaur fossil footprint found about 50 years ago is from a plant-eating dinosaur -- not a huge meat-eating dinoâ€twitter.com/i/web/status/1â€¦kL
cnni

12:00 pm ET October 22, 2021 RETWEET
Smoke from wildfires impacts far more people east of the Rocky Mountains than in the West, where most large fires iâ€twitter.com/i/web/status/1â€¦QL
CNNweather