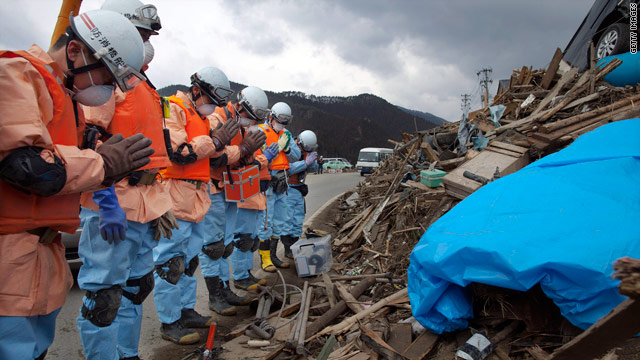 Emergency workers say a prayer next to a body just pulled from the rubble Monday in Rikuzentakata, Japan.
March 21st, 2011
01:30 AM ET

[8:40 p.m. Monday ET, 9:40 a.m. Tuesday in Tokyo] An air monitor in Seattle has detected trace levels of radiation in connection with the nuclear emergency in Japan, the Washington State Department of Health said. Officials said the levels do not pose a health risk.

[8:29 p.m. Monday ET, 9:29 a.m. Tuesday in Tokyo] The U.S. military is considering the mandatory evacuation of thousands of American troops and their families in Japan out of concern over rising radiation levels, a senior defense official said, according to CNN's Chris Lawrence.

The official, who did not want to be on the record talking about ongoing deliberations, says there are no discussions to evacuate all U.S. troops across the country. The talks have focused exclusively on U.S. troops in Yokosuka, just south of Tokyo, the official said. Yokosuka is home to America's largest naval base in Japan.

The official told CNN this is strictly a contingency plan, and could be accomplished "if they needed to do it in a hurry, with gray tails," or large military transport planes like a C-17.

CBS News first reported that the evacuation were being considered.

[6:50 p.m. Monday ET, 7:50 a.m. Tuesday in Tokyo] One of the more than 8,800 people who have been found dead after Japan's earthquake and tsunami was an American woman teaching English in that country, her family said Monday.

Taylor Anderson, 24, had been missing since the tsunami struck earlier this month. She'd been teaching in Ishinomaki, Japan for the last three years, according to her parents.

[1:40 p.m. Monday ET, 2:40 a.m. Tuesday in Tokyo] The Nuclear Regulatory Commission was poised Monday to begin a 90-day review of Japan's nuclear crisis - including a 30-day "quick look" - so that any lessons learned could quickly be applied to the 104 commercial reactors in the United States. Full story

[12:41 p.m. Monday ET, 1:41 a.m. Tuesday in Tokyo] The death toll in the March 11 earthquake and tsunami stands at 8,805, officials said Monday evening, according to a Kyodo News report. The National Police Agency says 12,654 people are reported as missing.

[11:44 a.m. Monday ET, 12:44 a.m. Tuesday in Tokyo] Japan's Industry Ministry says the country's oil refining capacity is now at 80% of the capacity it had before the March 11 disaster, broadcaster NHK reports. The government hopes gasoline shortages in the Tokyo area will be alleviated in days, the report said, and that quake-ravaged northeastern Japan could get enough fuel by Tuesday.

[11:07 a.m. Monday ET, 12:23 a.m. Tuesday in Tokyo] Tokyo Electric Power Co. (TEPCO) said it has no plans to use a concrete pump engine to place a mixture of mortar and water into the containment vessel and spent nuclear fuel pool at the No. 4 reactor. Instead, the pump would be used to pour only water. Japan's Nuclear and Industrial Safety Agency said earlier Monday that it expected to conduct tests on what it called a "concrete pump engine," which the agency initially said would pump a mix of mortar and water.

[10:23 a.m. Monday ET, 11:23 p.m. Monday in Tokyo] The U.S. Navy is moving the aircraft carrier USS George Washington from its port at Yokosuka Naval Base near Yokohama to avoid radiation exposure.

"Moving USS George Washington is a precaution given the capabilities of the vessel and the complex nature of this disaster," according to a statement on the ship's official Facebook page.

The 97,000-ton warship will remain in waters off Japan, the statement said.

[10:05 a.m. Monday ET, 11:05 p.m. Monday in Tokyo] The World Bank said Monday it expects only a temporary slowdown in Japan's economy as a result of the March 11 earthquake and tsunami. Growth should resume in the summer as rebuilding efforts ramp up, the agency says in its East Asia and Pacific Economic Update. Wider effects on trade in East Asia are also expected to be limited, the bank said.

[8:57 a.m. Monday ET, 9:57 p.m. Monday Tokyo] "The crisis has still not been resolved, and the situation at the Fukushima Daiichi nuclear power plant remains very serious," Yukiya Amano, the director-general of the International Atomic Energy Agency, told its board of governors Monday after a visit to the site. "Buildings have been damaged by explosions," he said. "There has, for the most part, been no electric power. Radiation levels are elevated. It is no exaggeration to describe the work of the emergency teams as heroic."

[8:48 a.m. Monday ET, 9:48 p.m. Monday in Tokyo] Short-term exposure to food contaminated by radiation from Japan's damaged Fukushima Daiichi nuclear plant poses no immediate health risk, a spokesman for the World Health Organization said Monday. The United Nations organization initially said the food-safety situation was "more serious" than originally thought. But spokesman Peter Cordingley said Monday that the assessment was based not on the levels of contamination but that radioactivity was found in food beyond the 12.4-mile (30-kilometer) evacuation zone.

[7:51 a.m. Monday ET, 8:51 p.m. Monday in Tokyo] Victims of the March 11 tsunami were well prepared for an evacuation, but the strength and speed of the massive waves were overwhelming, a Japanese forensics expert tells the Yomiuri Shimbun.

Many victims carried backpacks, in which they carried photo albums, health insurance documents and their personal seals, stamps used like signatures to authenticate official papers in Japan, Iwase told Yomiuri.

Ninety percent of the victims drowned, Iwase said, and many of the bodies showed signs of impacts equivalent to being hit by a car traveling 30 to 40 kilometers per hour (19 to 25 mph).

[7:08 a.m. Monday ET, 8:08 p.m. Monday Tokyo] The Japanese government has ordered that leafy vegetables not be shipped out of four prefectures - Ibaraki, Tochigi, Gunma and Fukushima - after finding radiation levels above legal limits in the produce, Kyodo News reported.

Fukushima prefecture, home to the damaged Fukushima Daiichi nuclear plant, has also been ordered not to ship raw milk.

[6:26a.m. Monday ET, 7:26 p.m. Monday Tokyo] White smoke rose early Monday evening from the No. 2 reactor at the Fukushima Daiichi nuclear power plant, a Japanese nuclear and industrial safety agency said. The cause of the smoke was not immediately known, Hidehiko Nishiyama said.

[5:37a.m. Monday ET, 6:37 p.m. Monday Tokyo] Hidehiko Nishiyama, an official with Japan's Nuclear and Industrial Safety Agency, said officials did not know what was burning Monday in the Fukushima Daiichi nuclear plant reactor No. 3.  He said the smoke was coming from the building's southeastern side, where the reactor's spent nuclear fuel pool is located.

[2:53 a.m. Monday ET, 3:53 p.m. Monday Tokyo] After more than a week of blowing from the northwest, winds in and around the stricken Fukushima Daiichi nuclear power plant in Japan have now shifted - threatening to blow more radioactive emissions over more populated areas to the south.

The current pattern, with winds blowing from north/northeast through much of Japan, is expected to continue through Tuesday, according to CNN meteorologist Jennifer Delgado. That could carry more radioactive material onshore from the facility, which is 240 kilometers (150 miles) north of Tokyo.

The plant has suffered at least partial meltdowns in several of its reactors, leading to the emission of unknown quantities of radioactive material.

[1:04 a.m. Monday ET, 2:04 p.m. Monday Tokyo] Iodide pills will be made available Monday to U.S. military families and their dependents at four locations around Japan, according to the U.S. Navy's commander in Japan.

The potassium iodide pills, which are commonly prescribed to curb the ill effects of radiation exposure, will be made available starting at noon Monday at U.S. military facilities in Yokosuka, Ikego, Negishi and Atsugi, according to a Facebook posting with information from the Navy's Japan operations.

The message told people not to take the pills "until notified," and added that "there is enough potassium iodide in Japan for all" U.S. military personnel there.