A conference in Berlin that has gathered several world leaders to discuss the Libya conflict will call for sanctionâ€twitter.com/i/web/status/1â€¦2a 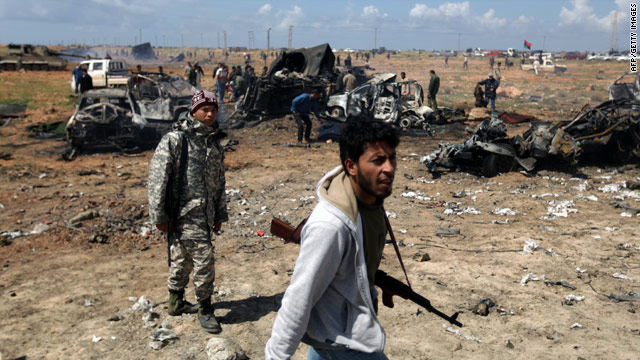 Protests in Yemen - Three top generals in Yemen have made an about-face and declared their support for anti-government protesters. One said he will order troops to protect protesters demonstrating against the country's long-time president, Ali Abdullah Saleh. Maj. Gen. Ali Mohsen Al-Ahmar's announcement ramps up the pressure on Saleh, who has ruled the nation for 32 years. The generals are part of the latest wave of officials, including the deputy speaker of parliament, who announced their resignations. Learn more about what inspired the protests in Yemen.

Where is Gadhafi? -Â  The heart of Moammar Gadhafi's compound lay in shambles Monday as the United States and allies continue their mission to dilute the Libyan leader's strength. But it's unclear where Gadhafi is now. He had vowed a "long-drawn war." American, French and British military forces launched an operation against Gadhafi's forces on Saturday, convinced that the Libyan leader was not adhering to a United Nations-mandated cease-fire.The attacks on Libyan military positions with missiles and airstrikes are part of an operation that will include enforcement of a no-fly zone. CNN.com is live blogging the latest from Libya andÂ explains how we got to this point in the conflict. A gripping photo gallery can be seen here.Â  See how the Arab LeagueÂ is reacting to the airstrikes.Â Watch anti-aircraft fire in Libya.

New smoke from Japan nuclear reactors - Fresh smoke has started spewing out ofÂ two adjacentÂ reactors at the Fukushima Daiichi nuclear power plant. The setbacks, which are reported in detail on CNN.com's live blog of the disaster, came despite fervent efforts to prevent the further release of radioactive materials at the stricken facility. Those who had been working nearby were evacuated shortly after the smoke was spotted around 4 p.m. Monday Tokyo time, according to a Tokyo Electric Power Company official.

Meanwhile, the detection of high levels of radioactivity in certain Japanese foods and the nation's clampdown on food sales signal that the threat to foodÂ safety in the country is more serious than originally thought, a World Health Organization official said Monday.

A 9.0-magnitude earthquake and tsunami hit the area on March 11. Watch Fareed Zakaria caution against judging the merits of nuclear power after the disaster.

The Chinese government has announced a new plan to crack down on plastic pollution across the country by 2025, inclâ€twitter.com/i/web/status/1â€¦WH
cnni

2:28 am ET January 20, 2020 RETWEET
Beirut has seen violent clashes between police and anti-government protesters, as part of a "week of rage" declaredâ€twitter.com/i/web/status/1â€¦v7
cnni

2:16 am ET January 20, 2020 RETWEET
The next decade's major health challenges, according to the WHO, include â–ªï¸Ž the climate crisis â–ªï¸Ž infectious twitter.com/i/web/status/1â€¦3zTPdxKUa0
cnni

2:10 am ET January 20, 2020 RETWEET
People living by the erupting Taal volcano in the Philippines are risking death by returning home. But they could lâ€twitter.com/i/web/status/1â€¦2M
cnni

1:59 am ET January 20, 2020 RETWEET
From his homeland in the South to unexpected places far beyond America's shores, here are some of the best places tâ€twitter.com/i/web/status/1â€¦iL
cnni