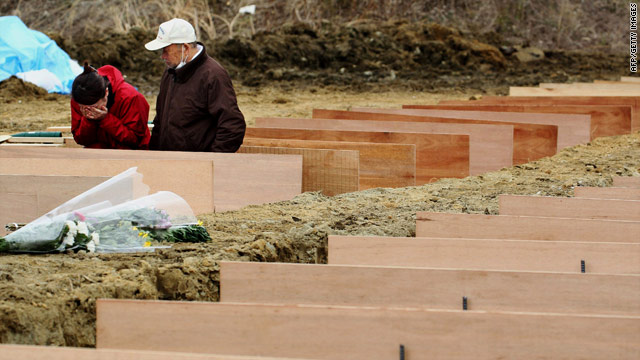 Relatives cry as the bodies of tsunami and earthquake victims are buried in Higashimatsushima in Miyagi prefecture on Tuesday.
March 22nd, 2011
11:08 PM ET

[10:18 p.m. Tuesday ET, 11:18 a.m. Wednesday in Tokyo] We were unable to update the blog for the past few hours due to technical difficulties. Here's what we missed:

- Several strong earthquakes jolted northeastern Japan on Wednesday morning, among them, one with a preliminary magnitude of 6.0 that jolted Fukushima Prefecture, home to the Daiichi nuclear power plant, around 7:15 a.m., Kyodo News reports. The jolts did not damage Fukushima Daiichi and Daini nuclear power plants or hinder reconstruction efforts. No tsunami warnings were issued.

- Japan's megabanks are considering extending loans totaling more than 1 trillion yen to Tokyo Electric Power by the end of March, Kyodo News reports. The move is intended to help the utility raise funds to boost electricity supply following a quake-triggered accident at its nuclear power plant in Fukushima Prefecture.

- Toyota Motor said it is extending a halt on full vehicle production in Japan through March 26 as it and other major manufacturers try to recover from the effects of this month's earthquake.Â The nation's three largest automakers, Toyota Motor, Honda Motor and Nissan, as well as electronics maker Sony all shut down factories following the earthquake and tsunami that killed at least 9,000 people and left another 13,500 missing.

- In the wake of Japan's nuclear disaster, all milk, milk products, fresh vegetables and fruit from one of four prefectures closest to the quake-stricken Fukushima Daiichi nuclear power plant will be prevented from entering the United States, a spokesperson for the U.S. Food and Drug Administration said Tuesday.

- It was Taylor Anderson's dream come true to be living in Japan. Then, the March 11 earthquake hit.Â Her parents last heard from her two days before the earthquake, which triggered a massive tsunami that devastated parts of northeast Japan, including the town where Anderson lived.

[2:07 p.m. Tuesday ET, 3:07 a.m. Wednesday in Tokyo] CNN.com posted a blog item earlier Tuesday citing an NHK report on radiation levels in soil 25 miles (40 kilometers) from the damaged Fukushima Daiichi nuclear plant. A CNN analysis of the data in that report shows that the radiation levels are 100 times normal, considerably less than what was in the NHK report.

[12:41 p.m. Tuesday ET, 1:41 a.m. Wednesday in Tokyo] "We've certainly erred on the side of caution in terms of women and children, dependents, in terms of offering them the opportunity to leave," Defense Secretary Robert Gates told reporters Tuesday. "We're watching it very carefully. We're very concerned about the health of our men and women in uniform. We're also deeply concerned about the well-being of our Japanese allies. So we will do what's best for our men and women in uniform and for our allies."

[12:39 p.m. Tuesday ET, 1:39 a.m. Wednesday in Tokyo] The U.S. Centers for Disease Control and Prevention says that the risk of exposure to radiation and contamination from radioactive materials is believed to be low, especially outside a radius of 80 kilometers (50 miles), John Roos, U.S. ambassador to Japan, said on Twitter Tuesday. Several countries, including the United States, have urged their citizens living within 80 kilometers of the plant to evacuate or stay indoors.

[11:35 a.m. Tuesday ET, 12:35 a.m. Wednesday in Tokyo] Technicians restored power to the control room of the No. 3 reactor at the quake-damaged Fukushima Daiichi nuclear power plant, the station's owner reported late Tuesday. Tokyo Electric Power Company said it was able to confirm power by turning the control room's lights on. The next step, the company said, is to get air conditioning in the room so workers can enter and work there.

[11:04 a.m. Tuesday ET, 12:04 a.m. Wednesday in Tokyo] The Japan Ink Makers Association is warning that the ink supply for the nation's newspapers could run dry within a month. Damage to chemical plants in northeastern Japan has left ink producers short of a key chemical to make the ink, broadcaster NHK reports. The ink makers are asking publications to reduce the number of pages they print and the colors they use until supplies normalize, according to the report.

[9:29 a.m. Tuesday ET, 10:29 p.m. Tuesday in Tokyo] Toyota said Tuesday that vehicle production will not resume at its Japanese plants until at least Monday. Production of parts to be sent overseas resumed Monday, the auto maker said.

[9:13 a.m. Tuesday ET, 10:13 p.m. Tuesday in Tokyo] Because a shortage of fuel has made cremation difficult, authorities in several Japanese municipalities are burying bodies without cremation, a highly unusual practice in Japan, Kyodo News reports. Coffins were also in short supply and authorities in Higashimatsushima were burying bodies wrapped in sheets, Kyodo reported. Higashimatsushima's government said it is preparing a gravesite for 1,000 burials.

[8:36 a.m. Tuesday ET, 9:36 p.m. Tuesday in Tokyo] Three volcanoes near Tokyo - Mount Fuji, Mount Hakone and Mount Yakidake - show no signs of eruption despite the recent rash of earthquakes in the area, a panel of government scientists said in a Kyodo News report.

"It's true that some volcanoes reacted to the (March 11) quake right afterward," Kyodo quotes Toshitsugu Fujii, chairman of the panel, as saying. "Because the quake measured magnitude 9.0 and moved the crests over 500 kilometers in length, it has possibly activated volcanic activities."

Aftershocks are becoming fewer, he said, so no eruptions are predicted.'

[7:58 a.m. Tuesday ET, 8:58 p.m. Tuesday in Tokyo] Tsunami evacuees at one elementary school in Otsuchi, Iwate prefecture, are staying in their cars overnight because the shelter is too crowded, the Mainichi Daily News reports. Evacuees stay around campfires outside the school until around midnight, then run their car heaters for a half-hour and try to get sleep, according to the report, but the vehicles are running short on gas. Lunch rations for the 300 people at the school are one rice ball and a bottle of barley tea.

[6:58 a.m. Tuesday ET, 7:58 p.m. Tuesday in Tokyo] Reactors 1 and 2 at Japan's earthquake-stricken Fukushima Daiichi nuclear power plant suffered more damage from seawater than originally believed, the plant's owner said Tuesday. The tsunami that followed the March 11 earthquake damaged electrical components and coolant pumps in units 1 and 2, two of the three now believed to have suffered damage to their reactor cores, said Sakae Muto, vice president of the Tokyo Electric Power Company. Reactor No. 2 suffered more damage than No. 1, and the earliest those parts can be replaced is Wednesday, Muto said.

[6:45 a.m. Tuesday ET, 7:45 p.m. Tuesday in Tokyo] Prices for cars could soon be heading up because of the earthquake in Japan, CNNMoney reports. The quake has closed some assembly plants. Other assembly plants, including at least one in the United States, have stopped production because parts plants in Japan have been affected.

[6:20 a.m. Tuesday ET, 7:20 p.m. Tuesday in Tokyo] An earthquake with a preliminary magnitude of 6.6 struck off the east coast of Honshu, Japan, on Tuesday evening, the U.S. Geological Survey reported. It was the third strong earthquake to hit within the last 2 1/2 hours near the epicenter of a 9.0 earthquake that rocked Japan on March 11, the agency said. The other two quakes had preliminary magnitudes of 6.6 and 6.4, making them among the strongest of several quakes that have shaken that part of Japan since the 9.0 quake.

[5:46 a.m. Tuesday ET, 6:46 p.m. Tuesday in Tokyo] Honda announced Tuesday that it is suspending production at production at car plants in Saitama and Mie and a motorcycle plant in Kumamoto until at least Sunday. It had previously said production at those plants would resume Wednesday.

[5:30 a.m. Tuesday ET, 6:30 p.m. Tuesday in Tokyo] Tests on Tuesday detected radiation in ocean water off the coast of Japan. Plant operator Tokyo Electric Power Co. said that high levels of radioactive substances were found in seawater near the plant, but said that the results did not represent a threat to human health.

"There should be no immediate health impact. If this situation continues for a long period of time, some impact can occur," Chief Cabinet Secretary Yukio Edano said.

The impact such radiation could have on marine life was unclear.

The company said it was planning to use concrete pumpers to pour water on the No. 4 reactor building for a three-hour period, but that work had not yet started.

[2:22 a.m. Tuesday ET, 3:22 p.m. Tuesday in Tokyo] White smoke rose Tuesday over the damaged Fukushima Daiichi nuclear plant as workers continued efforts to restore power at the facility - a key step that officials hope will allow them to bring cooling systems back online.

Japan's nuclear safety agency said it was not immediately clear why smoke was rising from the plant's No. 2 and No. 3 reactors. Tokyo Electric Power Company said in a statement that the smoke was decreasing.

[12:57 a.m. Tuesday ET, 1:57 p.m. Tuesday in Tokyo] Toshiba has sent more than 100 engineers to help resolve the crisis at nuclear plants in northeastern Japan, the company said in a statement Tuesday.

The company said more than 100 engineers were "providing vital support and resources" at the Tokyo Electric Power Company's Fukushima Daiichi and Fukushima Daini plants after requests from the power company and the Japanese government.

8:31 am ET January 23, 2022 RETWEET
The chief of German navy has resigned after suggesting that Crimea would "never come back" to Ukraine, a statementâ€twitter.com/i/web/status/1â€¦yJ
cnni

8:00 am ET January 23, 2022 RETWEET
Crews fighting a wildfire along the central coast of California near the iconic Highway 1 made progress Saturday inâ€twitter.com/i/web/status/1â€¦hh
CNNweather

6:31 am ET January 23, 2022 RETWEET
Gunfire rang out from several military camps in Burkina Faso, the government said, but it denied the military had sâ€twitter.com/i/web/status/1â€¦n0
cnni