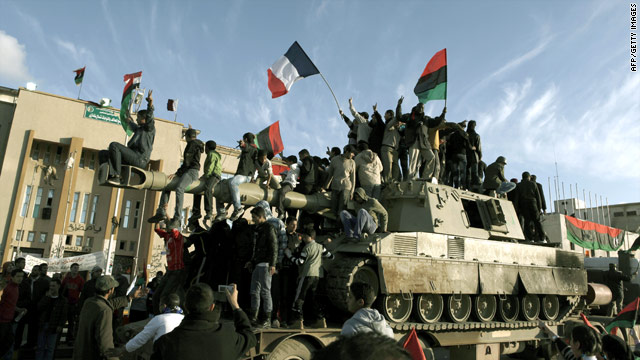 Libyans wave the French flag while parading on a 155mm howitzer belonging to Moammar Gadhafi's forces Monday in Benghazi.
March 22nd, 2011
10:09 AM ET

Libya - Both crew members from a U.S. fighter jet that crashed in Libya are safe, the U.S. military said. The pilot and weapons officer on board ejected and have minor injuries, according to the military.Â TheÂ military said theÂ Â F-15E Strike Eagle was not brought down by enemy fire but had an equipment malfunction.

American officials said the mission in Libya has weakened the momentum of forces loyal to Libyan leader Moammar Gadhafi.

However, there's been some criticism about the operation in Libya,Â withÂ U.S. lawmakers questioning what happens if there is a lengthy standoffÂ and alliesÂ squabbling overÂ whichÂ member of the coalition will takeÂ command of the mission.Â Â Check outÂ the CNN.com Libya live blog for up-to-the-minute developmentsÂ in the conflict.

Japan nuclear reactors - Workers at Japan's Fukushima Daiichi nuclear power plant have been scrambling to cool down fuel rods and prevent the release of additional radioactive material since a 9.0-magnitude earthquake and tsunami hit the area March 11. Seawater damage at reactors 1 and 2 at the plant is worse than originally thought, the plant's owner said Tuesday.Â Â See the latest on CNN.com's Japan live blog. CNN.com also breaks down the details about the status of each reactor.

Meanwhile, Japanese officials' concerns over food contamination expanded Tuesday as tests detected radiation in ocean water offshore. Plant operator Tokyo Electric Power Co. said that high levels of radioactive substances were found in seawater near the plant but said the results did not represent a threat to human health.

AfghanistanÂ - Afghan President Hamid Karzai announced Tuesday that forces in his country will be ready to take over security in some areas by July. Karzai said the surge of international forces has helped with security on the ground. For in-depth coverage of the war and news related to Afghanistan, checkÂ out CNN.com's Afghanistan Crossroads blog.

One person has died and five others were injured after an explosion in Uganda's capital Kampala, the country's Presâ€twitter.com/i/web/status/1â€¦wB
cnni

6:00 am ET October 24, 2021 RETWEET
Not everyone approves of this princess' wedding. She's going ahead with it anyway. cnn.it/3GrQAab
cnni

5:30 am ET October 24, 2021 RETWEET
Colombia's most-wanted drug lord Otoniel has been captured by authorities in what has been heralded as the biggestâ€twitter.com/i/web/status/1â€¦VZ
cnni

5:15 am ET October 24, 2021 RETWEET
JUST IN: A 6.5-magnitude quake has struck Taiwan, according to preliminary data from the European Mediterranean Seiâ€twitter.com/i/web/status/1â€¦bh
cnni