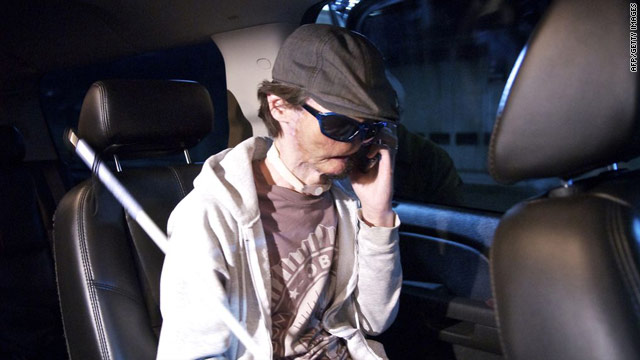 Dallas Wiens, in a handout photo from Brigham and Women's Hospital, arrives in Boston to prepare for face-transplant surgery.
March 22nd, 2011
11:37 AM ET

Wiens, of Fort Worth, Texas, was severely burned in 2008 when the cherry picker he was using to paint a church touched electrical wires. He lost his nose, teeth, one eye, his lips and the muscles that generate facial expressions, The Boston Globe reported. He also lost the vision in his remaining eye.

In a 15-hour operation involving 30 specialists, Wiens received the face of a donor whose age, skin tone and blood type matched his,Â the Globe reported.

The surgery is being paid for by a $3.4 million Defense Department grant intended to advance research into the procedure for use on wounded military members, a Pentagon spokesman said.

When Birney, 70, underwent a female-to-male sex reassignment in 2009, he applied for a new birth certificate reflecting that change, according to the New York Post.

Before he could get the revised document, Birney was required by New York City's Department of Health and Mental Hygiene to submit a detailed affidavit from his doctor outlining the procedure as well as his complete surgical record, the Post reported, adding that the department also required a post-operative psychiatric evaluation.

Birney has filed a lawsuit against the city, allegingÂ that the requirements are illegal, invasive and discriminatory, the paper said.

It has been nearly 43 years since the late country singer Johnny Cash gave his iconic performance at California's Folsom State Prison. On Monday night, his daughter Rosanne, long a star in her own right, performed there before a somewhat smaller audience of inmates, CNN affiliate KXTV-TV in Sacramento reported.

After her performance, she backed up a band of prisoners playing their own set, said the station, which included a video of part of the inmates' session.