President Biden and Vice President Harris are joined by three former presidents for a wreath-laying ceremony at Arlâ€twitter.com/i/web/status/1â€¦0t

Joseph R. Biden Jr. has been sworn in as America's 46th president. He is addressing the nation now. Follow live updâ€twitter.com/i/web/status/1â€¦lE

Kamala Harris is sworn in as the first woman, first Black person and first South Asian to hold the office of US vicâ€twitter.com/i/web/status/1â€¦AH

Several people have been injured in an explosion in Madrid, Spain's capital, the city's emergency services saidâ€twitter.com/i/web/status/1â€¦3b

VIP attendees, including the Obamas and Clintons, are arriving at the US Capitol for Biden's inauguration. Follow lâ€twitter.com/i/web/status/1â€¦rY 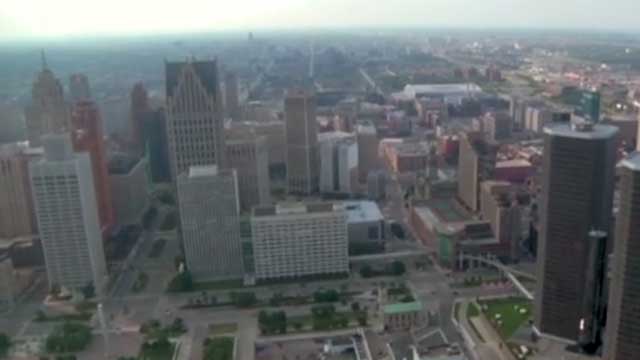 Detroit has lost a quarter of its population in the past decade. That's about 237,000 people, according to new Census figures. Lawmakers blame crime, political scandals, the collapse of the automobile industry, the housing market ... and the list goes on. However, things in Detroit aren't all bad. These videos underscore some of the great things happening in the Motor City.

Seeing past urban decay – Nothing positive in Detroit? Our friends over at VBS don't think so. They meet artists and musicians who say Detroit is a blank canvas full of possibility.

Greening Detroit roots – An environmental group sets up shop in one ofÂ Detroit's roughest neighborhoods. Their mission: to revitalize Detroit by going green. But how? We'll let them explain.

Education makeover – Math can be frightening in any city. But even more so in a city that has a staggering number of dropouts and seems to be failing its kids. Several Wayne State University professors are determined to change this and have practically reinvented the subject at math camp.

3:33 pm ET January 20, 2021 RETWEET
President Biden and Vice President Harris participated in a wreath-laying ceremony at the Tomb of the Unkown Soldieâ€twitter.com/i/web/status/1â€¦r2
cnni

2:54 pm ET January 20, 2021 RETWEET
"If President Biden's inaugural address is anything to go by, the global focus for the next four years will chieflyâ€twitter.com/i/web/status/1â€¦n1
cnni