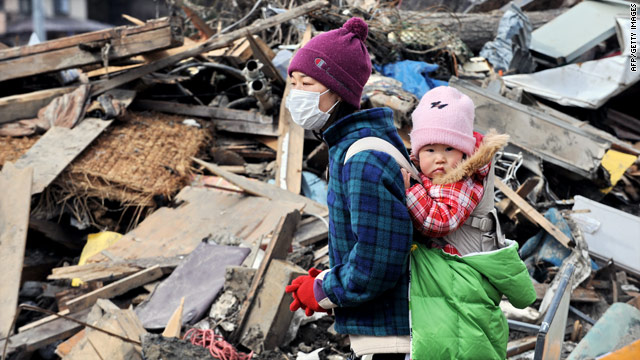 [1:59 p.m. ET Wednesday, 2:59 a.m. Thursday in Tokyo] Despite being urged not to hoard bottled water, residents of Japan's capital snapped it up after tests showed radioactive iodine in tap water at levels unsafe for infants. The city's water agency said the spike was likely caused by problems at the Fukushima Daiichi nuclear plant, located 240 kilometers (150 miles) away.Â  Tokyo officials earlier advised against giving tap water to infants. Grocery store owner Seiji Sasaki said he noted a sudden increase of customers. He had 40 cases of water in his store, but they were gone quickly.

â€“ Japan's megabanks are considering extending loans totaling more than 1 trillion yen to Tokyo Electric Power by the end of March, Kyodo News reports. The move is intended to help the utility raise funds to boost electricity supply following a quake-triggered accident at its nuclear power plant in Fukushima Prefecture.

â€“ Toyota Motor said it is extending a halt on full vehicle production in Japan through March 26 as it and other major manufacturers try to recover from the effects of this month's earthquake.Â The nation's three largest automakers, Toyota Motor, Honda Motor and Nissan, as well as electronics maker Sony all shut down factories following the earthquake and tsunami that killed at least 9,000 people and left another 13,500 missing.

â€“ In the wake of Japan's nuclear disaster, all milk, milk products, fresh vegetables and fruit from one of four prefectures closest to the quake-stricken Fukushima Daiichi nuclear power plant will be prevented from entering the United States, a spokesperson for the U.S. Food and Drug Administration said Tuesday.

â€“ It was Taylor Anderson's dream come true to be living in Japan. Then, the March 11 earthquake hit.Â Her parents last heard from her two days before the earthquake, which triggered a massive tsunami that devastated parts of northeast Japan, including the town where Anderson lived.

An evergreen tree that outlasted the dinosaurs is now endangered -- but marauding parakeets may be able to save theâ€twitter.com/i/web/status/1â€¦64
cnni

12:01 pm ET August 17, 2022 RETWEET
The lack of a public deadline or plan of action on the Colorado River came as a surprise to stakeholders and expertâ€twitter.com/i/web/status/1â€¦Bd
CNNweather

11:30 am ET August 17, 2022 RETWEET
It's not easy to get a politician to shut his mouth, but nature found a way in Canada when Ontario Premier Doug Forâ€twitter.com/i/web/status/1â€¦tW
cnni

11:15 am ET August 17, 2022 RETWEET
A US airstrike in Somalia over the weekend killed 13 members of the al-Shabaab terror group, US Africa Command saidâ€twitter.com/i/web/status/1â€¦N0
cnni

The lack of a public deadline or plan of action on the Colorado River came as a surprise to stakeholders and expertâ€twitter.com/i/web/status/1â€¦Bd
CNNweather

11:34 am ET August 17, 2022 RETWEET
As temperatures head into the triple-digits, California residents are asked to conserve energy usage to protect agaâ€twitter.com/i/web/status/1â€¦fk
CNNweather