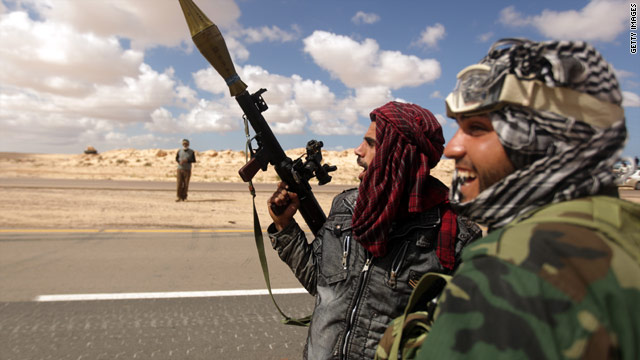 Libyan rebels deploy near the city of Ajdabiya to try to attack government forces that have encircled the town.
March 23rd, 2011
10:10 PM ET

[10:10 p.m. Wednesday ET, 4:10 a.m. Thursday in Libya] The coalition air effort to halt the Libyan government's attacks on civilians continued into Thursday for a sixth day, with an airstrike in the Tripoli suburb of Tajura, a government official said.

[9:20 p.m. Wednesday ET, 3:20 a.m. Thursday in Libya] After enduring five days of air strikes by coalition forces, Libyan government troops retain the upper hand. Government forces' move on Benghazi has been reversed, but attacks on Misrata and Ajdabiya continue. One witness said personnel in the main hospital were "paralyzed with fear."

[6:02 p.m. Wednesday ET, 12:02 a.m. Thursday in Libya] Members of Moammar Gadhafi's inner circle are contacting the United States and Arab states, but have been unclear about their intentions, senior U.S. officials said.

[5:48 p.m. Wednesday ET, 11:48 p.m. in Libya] House Speaker John Boehner has written a letter to President Barack Obama complaining of "limited, sometimes contradictory" information so far on the U.S.-led military mission in Libya and asked for the president to provide "a clear and robust assessment."

The push began at 8 p.m. (2 p.m. ET), when "heavy tanks for Gadhafi troops start attacking the hospital - the bombs falling here 20 meters (66 feet) around us," said one person inside the hospital. He said two deaths had occurred "around the hospital."

At one point, shelling occurred without respite for 40 minutes, he said. "Now, fortunately, no more shelling, but the situation is so serious that all the teams here - the doctors, the patients - are paralyzed, scared."

He called for international intervention to protect the civilians inside the institution. "Nobody can work here," he said. All the doctors here are completely paralyzed." Ambulances were not able to leave the hospital, which had lost its electricity and was running on generator power, he said.

[5:05 p.m. Wednesday ET, 11:05 p.m. in Libya] An update on which Arab nations are playing some role in the coalition operation: Jordanian government spokesman Taher Edwan says that Jordan's role will be limited to a humanitarian one. "Jordan did not and will not have any military participation in Libya, neither in planes or on the ground at all in Libya," he said.

The United Arab Emirates said Tuesday it will participate, but only in providing humanitarian assistance. Toward that end, the country has sent a ship and two planes with basic relief supplies, the country's news agency said.

[4:53 p.m. Wednesday ET, 10:53 p.m. in Libya] Members of the Obama administration, while briefing a bipartisan group of congressional aides Tuesday on the military action in Libya, stressed that the U.S. is "not at war" with Libya, according to an official who was there.

The official said there was "deep skepticism from both sides of the aisle, both sides of the capitol" during the session. The official said that concerns about the mission were expressed and that while some spoke of support for "what the president is doing," they were seeking guidance on how to answer their constituents when they ask "what's next," according to CNN's Dan Lothian.

According to the official, who spoke to CNN but did not want to be quoted on the record, the panel could not provide a clear answer and instead said they're focused on implementing the U.N. Security Council resolution.

Critics on Capitol Hill are angry over what they consider inadequate administration consultation with Congress before the start of the military mission over the weekend. They also

[4:30 p.m. Wednesday ET, 10:30 p.m. in Libya] CNN's Arwa Damon talks to the Libyan rebels who came to the aid of one of the two American servicemembers who ejected from a U.S. Air Force F-15 that crashed near Benghazi in eastern Libya after a malfunction.

Rebels recovered the crew member, a weapons officer, and treated him with "respect and dignity" until coalition forces reached him, U.S. Navy Adm. Samuel Locklear III said Tuesday. U.S. rescue teams picked up the other crew member, the pilot, who had landed in a different spot.

[3:06 p.m. Wednesday ET, 9:06 p.m. in Libya] More on U.S. Secretary of State Hillary Clinton's latest comments to reporters: She said it is "clear that Gadhafi has lost confidence of Libyan people."

That's the main reason "why he should leave power," she said Wednesday afternoon. He can't govern or "meet the legitimate aspirations of his own people."

Clinton indicated that international military action may be putting pressure on Gadhafi to step aside, but stressed that the goal of the military campaign remains purely humanitarian - to protect civilians and enforce the no-fly zone.

It is up to Gadhafi and his advisers "to determine what their next steps are," Clinton said. But we would "encourage them to make the right decision" and "prepare for a transition that does not include Col. Gadhafi."

[2:52 p.m. Wednesday ET, 8:52 p.m. in Libya] U.S. Secretary of State Hillary Clinton said that the United States and its global partners are making progress in Libya. Clinton cited the retreat of Gadhafi's troops from the eastern Libyan city and rebel stronghold of Benghazi, along with what she characterized as the successful establishment of conditions necessary for a no-fly zone.

"Many, many Libyans are safer today because the international community took action," Clinton said.

The U.S. government will continue to support the military mission as command and control shifts to NATO, she said.

[2:04 p.m. Wednesday ET, 8:04 p.m. in Libya] A new Gallup poll said 47% of Americans approve of military action against Libya while 37% disapprove. A CNN/Opinion Research poll released Monday, however, suggested a larger majority of Americans - seven in 10 - favored establishing a no-fly zone in Libya enforced by the United States and other nations.

[1:53 p.m. Wednesday ET, 7:53 p.m. in Libya] Parts of the eastern Libyan city of Ajdabiya fell to opposition forces even though Gadhafi's men, who have been pounding the area with artillery and heavy tank bombardments, retained control of the northern and western gates, opposition fighters and witnesses told CNN.

[12:41 p.m. Wednesday ET, 6:41 p.m. in Libya] In the last 24 hours, the international coalition has flown 175 sorties over Libya - 113 of them by U.S. planes, U.S. Rear Adm. Gerard Hueber said. He said the coalition has no indication that Libyan leader Moammar Gadhafi was complying with a United Nations mandate to stop attacks against civilians. Coalition forces are now focusing on applying pressure on Gadhafi's ground forces that are attacking civilians, Hueber said. That includes targeting Libya's mechanized forces and artillery and interdicting supply lines for "beans and bullets," he said.

The no-fly zone now spans Libya from east to west along its coastline, Hueber added.

[10:41 a.m. Wednesday ET, 4:41 p.m. in Libya] France's foreign minister said NATO will not take political leadership of the international coalition's mission in Libya, but will play a role in planning and operations to enforce the United Nations-backed no-fly zone. The minister, Alain Juppe, said a commission composed of foreign ministers from the participating coalition states will make the political decisions.

[10:37 a.m. Wednesday ET, 4:37 p.m. in Libya] Despite the freezing of its assets under a U.N. resolution, Libya could use its stockpile of gold to keep its government going, the BBC and CNN have reported. Libya's central bank is said to hold about $6 billion worth of gold.

[10:02 a.m. Wednesday ET, 4:02 p.m. in Libya] Some signs of normalcy sprouted in the besieged western Libyan town of Misrata after a night of coalition airstrikes that witnesses said targeted encampments of forces loyal to Moammar Gadhafi. "It is relatively quiet today - this is the first time we feel that way in weeks," said Mohammed, an opposition spokesman in the city who would only give his first name. "We want to express our gratitude to the international community since there were airstrikes this morning."

[7:31 a.m. Wednesday ET, 1:31 p.m. in Libya] Three journalists seized in Libya over the weekend have been released, Agence France-Presse said. AFP reporters Dave Clark and Roberto Schmidt and Getty Images photographer Joe Raedle were arrested near the eastern town of Ajdabiya on Saturday. The three were released in Tripoli.

The source of the blasts and gunfire in Tripoli were unclear, but there is a large military base in the area.

Hours earlier, Libyan leader Moammar Gadhafi had vowed to fight back against international forces seeking to impose a no-fly zone in his country. "We will not give up," he said to a crowd of supporters in a speech broadcast on state television Tuesday. "They will not terrorize us. We will defeat them by any method."

â€“ Libyaâ€™s central bank holds billions of dollars worth of gold, and despite the no-fly zone and sanctions, this could be useful to Gadhafi as he tries to survive, an international commercial attorney says.

â€“ The United States' costs related to the military intervention in Libya already are in the hundreds of millions of dollars, and this has sparked a debate over funding, CNNMoney reports.

To date, the United States has spent some $225 million firing Tomahawk missiles, according to CNN estimates based on U.S. Navy figures. The cost could reach up to $800 million to fully establish the no-fly zone and another $100 million a week to maintain it going forward, said Zack Cooper, a senior analyst for the Center for Strategic and Budgetary Assessments.