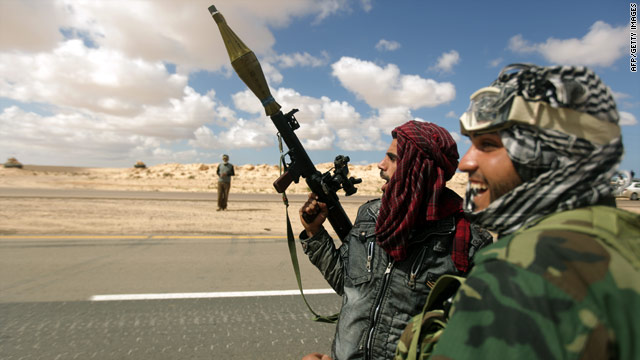 Libyan rebels deploy Tuesday for a second day from the key city of Ajdabiya to try to attack government forces.
March 23rd, 2011
11:24 AM ET

Tap water worries in Japan - There may be radioactive material in tap water in Tokyo. Japan, rocked by a March 11 earthquake and tsunami, is reporting that radiation in the water is over the limit considered safe for infants. The announcement is causing a run on bottled water. The natural disasters caused nuclear reactors at the Fukushima Daiichi plant to malfunction and spew radiation. (Check the status of each of the six reactors and surrounding buildings.) In addition to worries about water, there have been concerns about high radiation levels in food. For the latest developments, check out CNN.com's live Japan blog.

War in Libya - Libyan leader Moammar Gadhafi has vowed to continue fighting coalition forces. U.S. officials said there were airstrikes in Tripoli on Tuesday night, while the besieged town of Misrata, the scene of much previous fighting, was relatively quiet Wednesday after a night of coalition airstrikes. More details about the American fighter jet crash in Libya have emerged, and President Obama has talked more about his plan for the country.

Protests in Syria - Syria is the latest Middle East country to see protests. Violence erupted in the southern part of the country early Wednesday when security forces fired into a crowd of demonstrators near a mosque. Reports from human rights groups say up to six people were killed and several others were hurt. Earlier this week, Syrian authorities arrested a prominent opposition leader during demonstrations. Loay Hussein, who was a political prisoner from 1984 to 1991, was taken from his home in the Sehnaya district near the Syrian capital of Damascus, according to the country's Observatory for Human Rights.

China's annual emissions exceeded those of all developed nations combined in 2019, the first time this has happenedâ€twitter.com/i/web/status/1â€¦9f
cnni

6:04 am ET May 8, 2021 RETWEET
Students from the Scandinavian Cello School in Denmark found a unique way to give a concert by performing for cowsâ€twitter.com/i/web/status/1â€¦Th
cnni

5:01 am ET May 8, 2021 RETWEET
Just when you thought you were in the clear to stock up on toilet paper again, wood pulp, the primary raw materialâ€twitter.com/i/web/status/1â€¦tA
cnni

4:01 am ET May 8, 2021 RETWEET
Billions of cicadas will soon appear in the eastern US, the biggest emergence event since 2004â€twitter.com/i/web/status/1â€¦Dz
cnni

3:01 am ET May 8, 2021 RETWEET
Private equity firms, which buy and restructure businesses in hopes of turning a profit, stand at the vanguard of sâ€twitter.com/i/web/status/1â€¦Dt
cnni