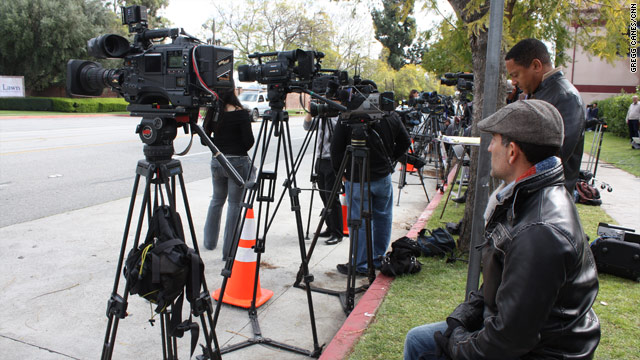 We waited outside the wrought-iron gates under threatening skies in for nearly two hours for the funeral procession of five black limos.

Still photographers with long lenses lined both sides of the street, shutters clicking while camera crews shot the limos as they glided through the entrance.

The procession was small and quick. There was no hearse, and a law enforcement officer later confirmed the family rode in the limos.

These are the same gates where we, members of the media, stood in front of when pop star Michael Jackson was buried. The longtime friends will be entombed in the same building.

The family leaves after saying its final goodbyes, and so do we, before the rain starts.

Gregg Canes is a photojournalist for CNN in Los Angeles.