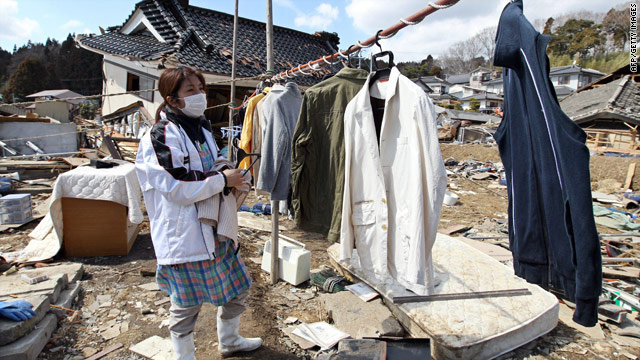 A woman hangs clothes she found among wreckage, in Otsuchi, Iwate Prefecture, on Thursday.
March 24th, 2011
01:50 AM ET

[9:56 p.m. ET Thursday, 10:56 a.m. Friday in Tokyo] The water that three men were recently exposed to while working at the Fukushima Daiichi nuclear power plant had 10,000 times the amount of typical radiation for that location, an official with Japan's nuclear and industrial safety agency said Friday.

The high reading indicates that the fuel inside the No. 3 reactor "is damaged," Hidehiko Nitsayama said.Â At least two of the workers were hospitalized after stepping in the water Thursday while laying cable in the turbine building of the No. 3 reactor.

Nitsayama explained that the water in this place is typically boiled and has very low levels of radiation. He said that government officials have contacted authorities with the Tokyo Electric Power Company, which manages the plant, to urge the company to "improve its radiation management measures."

[8:20 p.m. ET Thursday, 9:20 a.m. Friday in Tokyo] Nissan Motor Co. said it is considering shipping engines made in the United States to Japan to replace lost production at its quake-hit plant in Fukushima Prefecture, Kyodo News reports. Production at the Iwaki engine plant has been suspended due to the effects of the March 11 earthquake. The automaker said it is looking into whether its engine plant in Tennessee can supply V-6 engines to Japan.

[8:04 p.m. ET Thursday, 9:04 a.m. Friday in Tokyo] Tohoku Electric Power Co., which covers areas hit by the March 11 earthquake and tsunamis, says it will forgo rolling blackouts through April 3 after being able to secure enough electricity partly through conservation efforts, Kyodo News reports. Tokyo Electric Power Co. started its own blackouts in some service areas, including Tokyo, from March 14. The unprecedented measure will continue at least through April.

[3:44 p.m. ET Thursday, 4:44 a.m. Friday in Tokyo] The outlook is generally good for two workers at the Fukushima Daiichi nuclear plant, who were hospitalized after they stepped in contaminated water, experts said Thursday, provided they were promptly decontaminated.

Three workers were laying cables Wednesday in the basement of the turbine building for reactor No. 3 when they stepped into the water, Japanese Chief Cabinet Secretary Yukio Edano told reporters. It seeped into the ankle-height boots of two of the men, according to Tokyo Electric Power Company, which operates the plant. Those two men, one in his 30s and a second in his 20s, were taken to Fukushima Medical University Hospital, officials said. The third was not hospitalized, because his boots were higher and covered his skin, avoiding contact, according to Tokyo Electric.

[1:51 p.m. ET Thursday, 2:51 a.m. Friday in Tokyo] Low radiation levels have reached as far as Sweden, according to the Swedish Radiation Safety Authority. Leif Moberg, head of research for the authority, said there have been readings of radioactive iodine in Sweden, as expected, but the amount is "very low and it does not pose any health risk at all for humans or the environment."

[11:40 a.m. ET Thursday, 12:40 a.m. Friday in Tokyo] Forty-three people have died in hospitals because of inadequate medical care since the March 11 earthquake and tsunami, according to a survey by public broadcaster NHK. Power outages and lack of heat and medical supplies are cited as reasons for the deaths. NHK surveyed 255 hospitals in the hard-hit prefectures of Fukushima, Iwate and Miyagi.

[9:40 a.m. ET Thursday, 10:40 p.m. Thursday in Tokyo] The mother ship of Japan's whaling fleet will be delivering relief supplies to earthquake victims this weekend, Kyodo News reports. The Nisshin Maru will leave from Tokyo Friday to deliver supplies including kerosene, charcoal and instant ramen to survivors at a yet-to-be-determined port in northeast Japan, according to Kyodo.

[7:12 a.m. ET Thursday, 8:12 p.m. Thursday in Tokyo] Toyota announced Thursday that it will resume production of its Prius and Lexus CT 250h and HS 250h hybrids in Japan on Monday. Priuses will be built at Toyota's Tsutsumi plant and the Lexus models at Toyota's Kyushu plant, the company said in a statement.

[6:46 a.m. ET Thursday, 7:46 p.m. Thursday in Tokyo] Russian authorities have banned imports of all food products from six regions of Japan, according to a news release posted on the website on the consumer protection watchdog Rospotrebnadzor. On Wednesday, Hong Kong said that it was restricting food and milk imports from certain prefectures over the radiation concerns. The United States had previously announced import alerts covering milk, milk products, fresh vegetables and fruit from prefectures near the reactors.

[6:04 a.m. ET Thursday, 7:04 p.m. Thursday in Tokyo] Pregnant women and nursing mothers in Japan should not stop drinking tap water that contains the current limited amounts of radioactive iodine, the nation's leading obstetrics and gynecological organization said Thursday. The group said that women should not hesitate to drink tap water if measurements indicate 500 becquerels per kilogram of radioactive iodine, saying the harm to the mother and child is greater if the woman gets too dehydrated.

[5:51 a.m. ET Thursday, 6:51 p.m. Thursday in Tokyo] An earthquake with a preliminary magnitude of 6.1 struck off the east coast of Japan's main island of Honshu at 5:21 p.m. Thursday. The quake was centered about 90 miles northeast of Sendai.

[5:39 a.m. ET Thursday, 6:39 p.m. Thursday in Tokyo] Honda announced Thursday it will not resume vehicle production at auto plants in Saitama and Mie until at least April 4, adding a week on to its previous estimates for a resumption of production at those plants.

[5:13 a.m. ET Thursday, 6:13 p.m. Thursday in Tokyo] Japanese Chief Cabinet Secretary YukioEdano indicated Thursday that the government was prepared to compensate farmers and others whose income was threatened by the effects of the radiation spikes. He said that it wasn't yet clear how that might happen, whether it was buying up the existing crops or some other form.

[3:26 a.m. ET Thursday, 4:26 p.m. Thursday in Tokyo] Two people working at the Fukushima Daiichi nuclear power plant were sent to a hospital after being exposed to high levels of radioactive material in surrounding water, according to Japanese officials. A third worker was also exposed, but was not taken to the hospital.

The workers were laying cables Wednesday in the basement of the turbine building for reactor No. 3 when they stepped into water that was contaminated, Japanese Chief Cabinet Secretary Yukio Edano said Thursday. Their skin was exposed to it - which is different than the airborne exposure that has afflicted most of the affected workers thus far.

[1:46 a.m. ET Thursday, 2:46 p.m. Thursday in Tokyo] The amount of radioactive iodine in Tokyo's tap water dropped considerably in a test Thursday morning, down to a level that would be considered safe for infants to drink, the city's government said.

Tests from 6 a.m. Thursday at the Kanamichi Water Purification Plant, which provides water to 23 wards in Tokyo as well as five other cities, showed 79 becquerels of radioactive iodine per kilogram of water. A becquerel is a measurement ofÂ  radioactive intensity by weight. This is below the 100 becquerel level, the maximum that could be considered safe for infants ages 1 and younger.

And it is well below the 210 becquerel reading that was measured Tuesday night.

[10:33 p.m. ET Wednesday, 11:33 a.m. Thursday in Tokyo] Japan's main expressway connecting Tokyo and the quake-stricken northeast, has reopened for the first time since the earthquake struck on March 11, NHK reports. Only emergency vehicles had been allowed to travel on the 300-kilometer section of the Tohoku Expressway between Utsunomiya interchange in Tochigi prefecture and Ichinoseki interchange in Iwate prefecture. The ban on regular traffic was lifted at 6:00 a.m. Thursday.

5:30 am ET July 3, 2022 RETWEET
The Taliban has declared the Islamic State affiliate ISIS-K a corrupt â€śsectâ€ť and forbidden Afghans from contact wtwitter.com/i/web/status/1â€¦9HU70l
cnni

5:00 am ET July 3, 2022 RETWEET
North Korea has criticized an agreement between the United States, South Korea and Japan to strengthen military cooâ€twitter.com/i/web/status/1â€¦ht
cnni

5:30 am ET July 3, 2022 RETWEET
The Taliban has declared the Islamic State affiliate ISIS-K a corrupt â€śsectâ€ť and forbidden Afghans from contact wtwitter.com/i/web/status/1â€¦9HU70l
cnni

5:00 am ET July 3, 2022 RETWEET
North Korea has criticized an agreement between the United States, South Korea and Japan to strengthen military cooâ€twitter.com/i/web/status/1â€¦ht
cnni