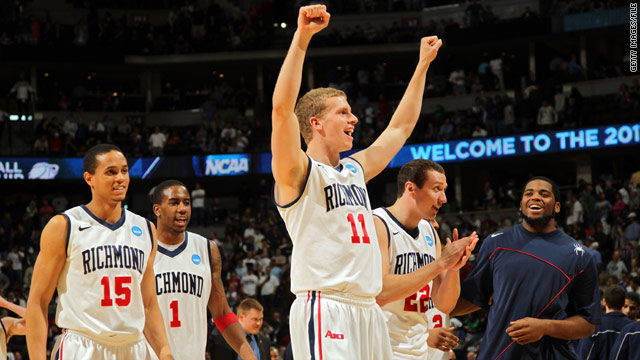 The Richmond Spiders celebrate their Sweet 16 berth last week. They are the lowest-seeded team remaining.
March 24th, 2011
11:37 AM ET

VCU and Richmond have made their Virginia hometown proud. The teams are preparing to do battle in Sweet 16 matches against Florida State and Kansas, respectively. Mayor Dwight Jones said, "It's kind of like Christmas here." No matter how the games shake out, one thing is certain, as SI.comâ€™s Ann Killion points out: This tournament season couldnâ€™t have been better for the city of Richmond.

Killion elaborates, "The city of about 200,000 has as many basketball teams left playing as the vaunted Big East. VCU's athletics website spiked from 800,000 hits a day to 2.5 million over the weekend, causing concern it might crash. (Coach) Shaka Smart and VCU were national trending topics on Twitter. Traffic is up 48 percent on the admissions page of the Richmond website. Players are getting standing ovations in class. Coaches can't order lunch without the other patrons gushing over them.â€ť

There is no doubt that the universities have their differences, but their ability to the overcome low seeds and even lower expectations with two of the most talked-about young coaches in the game has made them teams to contend with.

How did Richmond and VCU battle their way to San Antonio? Hereâ€™s a recap:

The Richmond Spiders earned their first Sweet 16 berth in 23 years with the help of five seniors, including Justin Harper and Kevin Anderson. Richmond upset Vanderbilt and beat Morehead State along its tournament route.

A core of four accomplished seniors has helped the VCU Rams advance to the Sweet 16, after they won a play-in game against the USC Trojans to punch their tourney ticket. Along the way, they defeated Georgetown and Purdue.

If youâ€™ve felt college hoops-deprived over the past few days, youâ€™ll get your fill tonight with four matchups (all times Eastern):

7: Percent that the value of MLB teams rose this year, according to an annual report by Forbes.

85: Number worn by Bengals star receiver Chad Ochocinco during a four-day tryout with the soccer club Sporting Kansas City. Ochocinco is hoping to join the MLS team if his tryout goes well.

33: Number of points Los Angeles Clippers star Blake Griffin scored in his first triple-double against the Washington Wizards on Wednesday.