A tornado described as "large and extremely dangerous" by the National Weather Service in Birmingham, Alabama, rippātwitter.com/i/web/status/1ā¦Ut

Sen. Mitch McConnell will let the Senate officially organize after a weeklong battle with Sen. Chuck Schumer over tātwitter.com/i/web/status/1ā¦wi

President Biden has signed an order reinstating Covid-19 travel restrictions for Brazil and much of Europe, as wellātwitter.com/i/web/status/1ā¦Mj 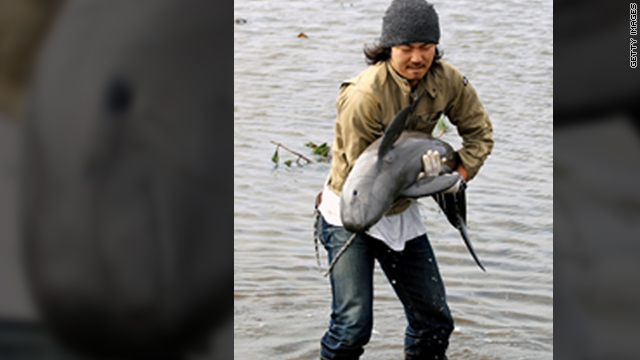 A young finless porpoise was rescued this week from a flooded rice paddy in Ishinomaki, Japan - where it had apparently been dumped by the March 11 tsunami - and released into the ocean, according to news reports.

Pet-shop owner Ryo Taira told Reuters a motorist spotted the animal in a field two kilometers (1.2 miles) from the coast on Tuesday. The man called Taira, who has been coming to the aid of animal victims of the earthquake and tsunami.

Tairo said he waded into the field and grabbed the porpoise.

"It was pretty weak by then, which was probably the only reason we could catch it," Reuters quoted him as saying.

He wrapped the creatureĀ  in towels, took it to the ocean and released it, he said, because facilities to help ailing animals have been damaged or destroyed by the tsunami and quake, according to an Agence France Presse report on AsiaOne.com.

"I don't know if it will live, but it's certainly a lot better than dying in a rice paddy," Tairo told the Asahi Shimbun, according to the Reuters report.

Finless porpoises, distinguished by their lack of a dorsal fin, inhabit shallow coastal waters of the Indian and western Pacific Oceans, according to marinebio.org.

"It is only a tennis tournament that we're playing and I don't think it should override health protocols and puttinātwitter.com/i/web/status/1ā¦gT
cnni

5:48 am ET January 26, 2021 RETWEET
Hundreds of thousands of farmers drove their tractors in convoy into the Indian capital New Delhi on Tuesday, as paātwitter.com/i/web/status/1ā¦3i
cnni

5:00 am ET January 26, 2021 RETWEET
While oil-rich Gulf Arab nations were among the first in the world to receive a vaccine, war-torn countries such asātwitter.com/i/web/status/1ā¦pG
cnni

4:45 am ET January 26, 2021 RETWEET
A US bankruptcy judge has approved a Weinstein Company liquidation plan that allocates over $17 million for Harveyātwitter.com/i/web/status/1ā¦xP
cnni