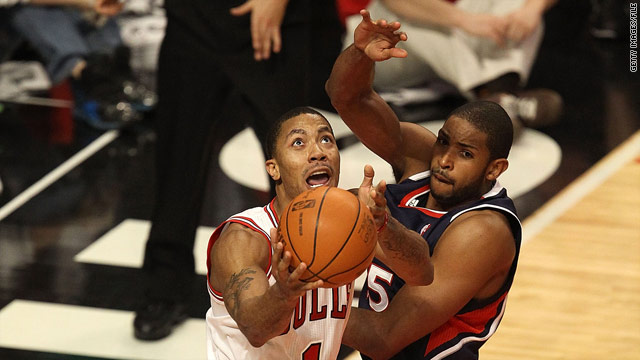 Horford, other NBA stars to donate $1,000 per point to Japan relief efforts

They say defense wins championships, but beginning Friday night, a handful of NBA stars can champion Japan by breaking down defenses.

For every point they score in select games this weekend, the players will donate a cool grand to Japan's relief efforts. Putting up points shouldn't be a tall order for the Chicago Bulls' Derrick Rose, the Los Angeles Lakers' Pau Gasol, the Portland Trailblazers' LaMarcus Aldridge, the Oklahoma City Thunder's Russell Westbrook or the Atlanta Hawks' Al Horford. Each has been averaging between 16 and 25 points all season.

JaVale McGee of the Washington Wizards and Pau's little brother, Marc Gasol of the Memphis Grizzlies, will also lend their marksmanship to the cause, and 13 other players will donate set amounts.

I caught up with Horford, from my hometown Hawks, after Friday's practice. Let this be a warning, New Jersey Nets: Horford says he's going "to try to be a little more aggressive" in Saturday night's game - and I'm sure you remember he dropped 24 on you when you visited the A-Town in December.

Horford said agent Arn Tellem of Wasserman Media Group, which represents the athletes, came up with the idea. Horford's teammate Joe Johnson joined Rose, Gasol and Westbrook last year in a similar effort for victims of the earthquake in Haiti.

"You don't ever want tragedy to happen anywhere," the 6-foot-10 forward said, "but we have the ability to help out and encourage others to do the same."

Horford said he was heartbroken watching CNN footage from the tsunami's aftermath. It was hard to believe what he was witnessing, he said.

"I know it happened, but it almost seems like it comes from one of those end-of-the-world movies we watch. ... I can't imagine what those people are going through right now."

The donations will go to the Japan Relief and Recovery Fund run by Direct Relief International, which "supports the immediate health needs of people by working with local authorities best situated to assess, respond and prepare for the long-term recovery," according to the nonprofit's website.

The group has already provided money to help displaced people, especially the elderly and those with disabilities, at 20 facilities in the ravaged Miyagi Prefecture.

In a statement, Direct Relief International CEO Thomas Tighe applauded the players' "world-class generosity" and added, "We hope they light up scoreboards this weekend."

Tellem said Wasserman, too, was proud of its players and encouraged anyone wanting to follow the hoopsters' example to send a donation to Direct Relief, which has committed $1.5 million to the relief effort. You can send $10 to the fund by texting "Give10" to 20222.

I always root for my Hawks, and I'll be cheering especially loudly for Horford on Saturday night. Sure, Rose, Westbrook and Aldridge are beasts, but Big Horf has the most favorable matchup. I think he can take them. Go ahead and call me a homer.

Whom do you think will be the weekend's top scorer among these philanthropic ballers? Let us know below.