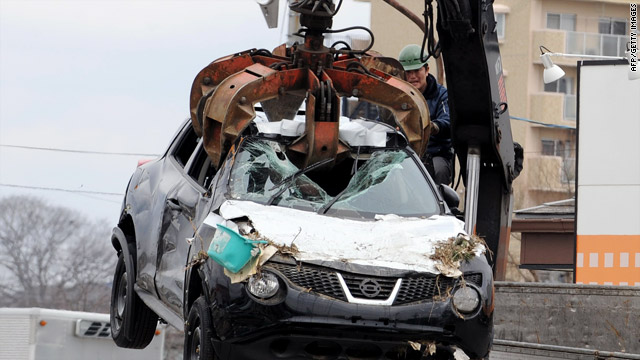 A worker puts a destroyed car into a truck during clean-up operations in Sendai, Japan, on Friday.
March 25th, 2011
11:42 PM ET

Similarly high levels of radiation had been detected in the same locales in recent days, though the latest readings indicate a notable increase. These high levels suggest there may have been some sort of leakage directly into the ocean - unlikely to be because of atmosphere emissions or rain alone, said an official with the Tokyo Electric Power Co., which operates the nuclear plant.

But an official with Japan's nuclear safety agency told reporters Saturday that - while drinking such water would be dangerous, given the radiation's potential to cause cancer - the effect on aquatic life in the Pacific Ocean may be relatively minimal. That's because the radiation tends to dilute the further one moves away from the nuclear plant. Data posted on Japan's education and science ministry's website showed relatively small amounts of radioactive particles several kilometers offshore.

[10:07 p.m. ET Friday, 11:07 a.m. Saturday in Tokyo] Tokyo Electric Power Co. is preparing to inject fresh water into the No. 2 reactor core at the Fukushima Daiichi nuclear plant to enhance cooling efficiency after highly radioactive water was found leaking near all four troubled reactor units at the plant, Kyodo News reports. The utility will try to remove pools of water containing highly concentrated radioactive substances that may have seeped from either the reactor cores or spent fuel pools, while also trying to restore power at the No. 2 reactor.

[5:54 p.m. ET Friday, 6:54 a.m. Saturday in Tokyo] You can see the survivors making the choice as they walk through the debris-strewn main street of Otsuchi in Japan - stay or go?

Some amble along as if in a daze, trying to comprehend the present and match it with an uncertain future. Others look like tourists, coolly trying to place a cousin's house or a grandmother's garden.

But the dilemma is the same for them all: do you stay and rebuild in a devastated small town, struggling economically even before the tsunami, or pull up stakes and start anew in a big city?

[12:37 p.m. ET Friday, 1:37 a.m. Saturday in Tokyo] The Japanese government is considering instituting daylight-saving time or electricity price increases as options to conserve power during summer months when demand may outstrip supply, the Japan Times reported early Saturday. The measures are being considered to make up for the loss of two nuclear power plants damaged in the March 11 earthquake and tsunami.

[11:34 a.m. ET Friday, 12:34 a.m. Saturday in Tokyo] Three men working near the No. 3 reactor at the Fukushima Daiichi nuclear plant Thursday stepped into water that had 10,000 times the amount of radiation typical for a nuclear plant, a Japanese government official said Friday, but nuclear experts said the burns suffered by the workers may not amount to much more than a sunburn.

Beta rays given off by radioactive substances don't penetrate deeply into materials, including flesh, said Nolan Hertel, a professor nuclear engineering at Georgia Tech. Consequently, the danger is relatively limited, he said. "Basically, a beta burn would be akin to a bad sunburn," he said.

[11:28 a.m. ET Friday, 12:28 a.m. Saturday in Tokyo] Three of every five survivors of the March 11 earthquake and tsunami say they are unable or unwilling to return to their homes, according to a survey by broadcaster NHK, which polled 488 people staying in shelters in the hardest-hit prefectures of Fukushima, Miyagi and Iwate.

[11:04 a.m. ET Friday, 12:04 a.m. Saturday in Tokyo] As Japanese suppliers scramble to come back on line after the devastating earthquake and tsunami, Ford Motor Co. is asking its dealers to order trucks and SUVs in any color but black, CNNMoney reports.

Specifically, Ford is asking dealers not to order any new full-size pick-ups or SUVs in so-called Tuxedo Black because of a problem getting a paint ingredient from a supplier in Japan. The automaker is also scaling back, but not stopping, its use of Tuxedo Black on mid-sized SUVs and the large Ford Taurus and Lincoln MKS sedans.

Red's a problem, too. Ford is scaling back three shades of red on SuperDuty and Ranger trucks, Focus compact cars, Econoline vans and Lincoln Navigator SUVs.

"To be clear, though, all these vehicles and colors are available now," Ford spokesman Todd Nissen said in an email. "We have adequate inventories on dealer lots to meet consumer demand."

[10:12 a.m. ET Friday, 11:12 p.m. Friday in Tokyo] Japan's national soccer team may not be able to participate in a prestigious tournament in South America during the summer because the earthquake and tsunami postponed domestic league games until July, Kyodo News reports. The Japanese national squad was scheduled to participate in the Copa America in Argentina in July. But five rounds of domestic league games have been rescheduled for that time, Japan Football Association technical director Hiromi Hara told Kyodo, and some clubs do not want to release their players for the international tournament.

[9:02 a.m. ET Friday, 10:02 p.m. Friday in Tokyo] Smokers in Japan may have trouble finding their favorite brands in the coming weeks after Japan Tobacco Inc., the nation's leading cigarette supplier, said Friday it will be suspending shipments of its products between March 30 and April 10. During that time, the company said in a statement, it will concentrate on producing enough inventory to satisfy demand for its 25 key products using factories in western Japan. The company says several of its factories and distribution facilities were damaged in the March 11 quake off the east coast of the main island of Honshu.

The company says about 37 percent of Japanese men smoke and 12 percent of women, according to a Bloomberg Businessweek report from August.

[8:05 a.m. ET Friday, 9:05 p.m. Friday in Tokyo] An earthquake with a preliminary magnitude of 6.4 struck off the coast of the main Japanese island of Honshu Friday night, according to the U.S. Geological Survey. The epicenter was 67 miles (108 kilometers) east-northeast of Sendai at a depth of about 24 miles, according to a preliminary USGS report.

China is stopping imports of dairy, fruit, vegetables and aquatic animals from five prefectures, according to a report from the Xinhua news agency.

Neither country said how long the bans would remain in effect, according to the reports.

[7:06 a.m. ET Friday, 8:06 p.m. Friday in Tokyo] Two Japanese citizens - one from Nagano and the other from Saitama, both 200 kilometers or further from Fukushima - traveling to China were taken to a hospital after showing exceedingly high levels of radiation, China'sÂ  state-run Xinhua news agency reported. A spokesman for the Japanese Embassy in China said Friday that the two are "fine" having left the hospital and joined their tour group.

The iconic 55-year-old Grand Prince Akasaka Hotel was a trendy place for dates in the 1980s, but business had fallen off with increased competition from international hotel chains in the area, reports said.

Now it will house as many as 1,600 evacuees from the earthquake, tsumani and radiation leaks from the Fukushima Daiichi nuclear power plant.

How to secure a room and possible costs have yet to be determined, but there has been a flood of requests for space, Kyodo News reports.

[5:33 a.m. ET Friday, 6:33 p.m. Friday in Tokyo] Tokyo Electric Power said Friday that warm summer weather and demands for air conditioning will make rolling blackouts necessary in July, Kyodo News reports. Peak demand in July will be about 55 million kilowatts but the utility expects to have a capacity of only 46.5 million kilowatts, according to the report. The company said rolling blackouts it instituted on March 14 are expected to continue through April. It expects to restore some capacity in the coming months, but not enough to meet demand during the heat of July, according to the report.

[4:42 a.m. ET Friday, 5:42 p.m. Friday in Tokyo] Tap water tested at four sites in Japan's Ibaraki prefecture all showed radiation levels above what is considered safe for babies to drink, according to government data released Friday.

The pertinent facilities provide water for residents in the cities of Tokaimura and Hitachi. The results, from samples taken on Thursday, showed between a low of 119 becquerels of radioactive iodine per kilogram of water to a high of 230 becquerels of the same radioactive substance.

Any level above 100 becquerels is not considered safe for infants 1-year old and younger to drink, according to the Japanese government. Still, all are below the 300-becquerel limit for all adults.

Samples of Tokyo's tap water taken at 6 a.m. Friday showed 51 becquerels of radioactive iodine per kilogram of water, the city waterworks bureau reported on its website. Any level above 100 becquerels is not considered safe for infants 1-year old and younger to drink.

On Tuesday night, samples had 210 becquerels of radioactive iodine - prompting a government decision, later reversed, to urge parents not to give tap water to babies.

The previous day, the Chiba Nogiko water treatment plant had a measure of 220 becquerels , while the Kuriyama facility had a reading of 180 becquerels, according to a statement from Chiba's waterworks bureau. These two plants provide water for the city of Matsudo, about 20 miles northeast of Tokyo.

[3:07 a.m. ET Friday, 4:07 p.m. Friday in Tokyo] Water contamination in unit No. 3 basement, which exposed threeÂ  men working at the Fukushima Daiichi nuclearÂ  power plant to 10,000 times the amount ofÂ  radiation typical for that locale, is likely from the reactor core, an official with the Japan nuclear and industrialÂ  safety agency said Friday.

He said there's a possibility of "some sort of leakage" - including potentially from a crack in the unit's containment vessel.

The incident raised questions about radiation control measures at the plant as 536 people - including government authorities and firefighters continued working there Friday, according to an official with the plant's owner, Tokyo Electric Power Co.

The ship is a backup for Japanese systems addressing the same problem, said Toshimi Kitazawa, the defense minister.

Chief Cabinet Secretary Yukio Edano said authorities will provide transportation in response to growing demand among those living between 20 and 30 kilometers hoping to get farther away from the stricken plant.

The Portuguese government has denounced the British government's decision not to lift quarantine for people traveliâ€twitter.com/i/web/status/1â€¦eR
cnni

12:10 pm ET July 4, 2020 RETWEET
As America continues its reckoning with systemic racism, the NFL has announced it will play "Lift Every Voice and Sâ€twitter.com/i/web/status/1â€¦Dv
cnni

11:50 am ET July 4, 2020 RETWEET
The Amazon CEO is now worth nearly $172 billion, a new record for the world's richest person, according to Bloomberâ€twitter.com/i/web/status/1â€¦kp
cnni