British Airways says it is stopping all service to and from mainland China after the Foreign Office advised againstโtwitter.com/i/web/status/1โฆpt

A chartered flight with about 210 Americans aboard arrived in Alaska to refuel on its first US stop since leaving tโtwitter.com/i/web/status/1โฆ3Y

A police officer in Maryland was charged with murder after authorities say he shot an unarmed man seven times whileโtwitter.com/i/web/status/1โฆr1

The Department of Energy has released more than 100 pages of documents related to its former Secretary Rick Perry aโtwitter.com/i/web/status/1โฆOs

A Cuban man who died Monday morning in Miami is the sixth person to pass away since October while in custody of Immโtwitter.com/i/web/status/1โฆOu

A flight chartered by the State Department has left Wuhan, the city at the epicenter of the coronavirus outbreak, tโtwitter.com/i/web/status/1โฆou

Fifty US military personnel have now been diagnosed with concussions and traumatic brain injuries following the Iraโtwitter.com/i/web/status/1โฆPj 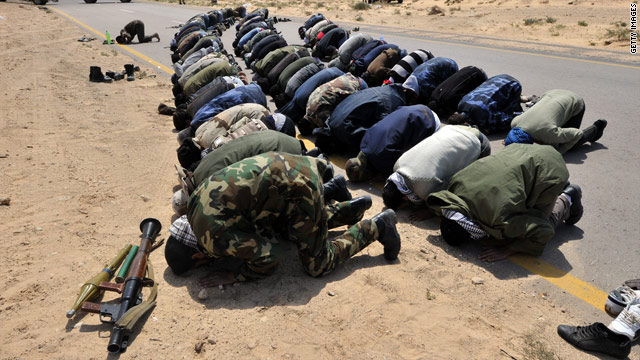 Libyan rebels pray while preparing for battle against government forces near the city of Ajdabiya.
March 25th, 2011
06:34 PM ET

[6:33 p.m. ET Friday, 12:33 a.m. Saturday in Libya] President Obama will speak to the nation about Libya on Monday evening from the National Defense University at Fort McNair in Washington, D.C., the White House announced.

Ham, who is overseeing U.S. military involvement in the Libyan mission, said the biggest challenge in going after Moammar Gadhafi's troops and snipers is when they are in close proximity to civilians.

He also said that removing Gadhafi by military means is not the aim of the mission.

[10:00 a.m. ET Friday, 4:00 p.m. Friday in Libya] The Libyan delegation attending an African Union meeting in Ethiopia said Friday that Libya is committed to a cease-fire and is ready to let the African Union monitor the cease-fire.

"We demand the cessation of the air bombardment and the naval blockade carried out by Western forces and the United States, for the invalidity of its argument to protect civilians since it is killing them by the hundreds and is attacking and destroying our armed forces, and paving the way for the other side to attack," said Mohammed al-Zwai, speaker of the Libyan People's Assembly.

[3:15 a.m. ET Friday, 7:15 a.m. Friday in Libya] The UAE Minister of Foreign Affairs, Sheikh Abdulla bin Zayed Al Nahyan issued a statement Friday saying that the UAE air force will send 12 aircraft to help patrol and enforce the No Fly Zone in Libya, and that participation will start in the coming days.

Warplanes roared through the skies over the Libya capital, Tripoli, early Friday, dropping bombs on the outskirts of the city where military bases are located.

In Ajdabiya, about 430 miles (700 km) south-southeast of the capital, the British Ministry of Defense on Friday reported airstrikes on "Libyan armoured vehicles which were threatening the civilian population."

NATO members agreed to take over enforcement of the no-fly zone over Libya. Under the agreement, NATO forces will be able to close air space to all flights except for humanitarian ones and will be able to use force in self-defense.

That mandate is not being interpreted as a license to attack Libyan government troops who may be threatening unarmed civilians.

Michael Burns, a former U.S. ambassador to NATO, said he expects the defense alliance to take over command of the entire operation in a few days to keep pressure on Libyan leader Moammar Gadhafi.

"The no-flight zone alone can not protect the civilians of Libya," Burns said on CNN's "AC360" Thursday night "Gadhafi is still attacking ... He is still on the move in some places."

This blog โ This Just In โ will no longer be updated. Looking for the freshest news from CNN? Go to our ever-popular CNN.com homepage on your desktop or your mobile device, and join the party at @cnnbrk, the world's most-followed account for news.

In November, Prince Andrew claimed he was "willing to help any appropriate law enforcement agency" on Jeffrey Epsteโtwitter.com/i/web/status/1โฆPq
cnni

7:40 am ET January 29, 2020 RETWEET
Lawmakers in the US House approved a bill that would establish as US policy that the succession of Tibetan Buddhistโtwitter.com/i/web/status/1โฆlO
cnni

7:40 am ET January 29, 2020 RETWEET
A flight carrying 201 American passengers out of Wuhan has continued on to California following health screenings aโtwitter.com/i/web/status/1โฆN2
cnni