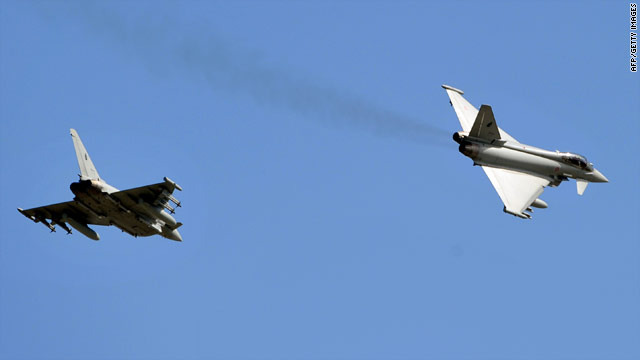 Italian Eurofighters land at Trapani-Birgi air base in Sicily after a Friday mission.
March 25th, 2011
10:33 AM ET

Libya violence - Coalition warplanes dropped bombs on the outskirts of Tripoli early Friday as Libyan forces retaliated with anti-aircraft fire. Hundreds of miles away in Ajdabiya, coalition airstrikes targeted armored vehicles that the British Defense Ministry said were threatening the civilian population there. The military action marked the sixth straight day of bombardments from coalition jets and came a day after NATO agreed to take over enforcement of the "no-fly" zone.

Rebels on the ground continue to fight leader Moammar GadhafiŌĆÖs forces, and in Misrata┬Ā- where more than 100 people have died in the last week and hundreds more have been wounded┬Ā- reports have emerged that a hospital has been operating on generator power with no anesthesia or painkillers.

Japan nuclear plant - Authorities say there may have been a breach of the containment vessel surrounding the No. 3 reactor at the Fukushima Daiichi nuclear power plant. Earlier this week, three men working outside the reactor stepped in water that had 10,000 times the typical amount of radiation, indicating ŌĆ£some sort of leakage.ŌĆØ Tokyo Electric Power Co., which owns the plant, said the incident raises concern for the 536 people working at the plant.

People living between 12.5 and 19 miles from the plant have been encouraged to evacuate. An official said the evacuation was not mandatory but could not rule out the possibility of future mandatory evacuations if radiation levels continue to rise. Japanese Prime Minister Naoto Kan said the situation does not make him optimistic.

Mideast unrest - Turmoil persists in the Middle East and North Africa as citizens in several countries are upset by┬Āpoor economic conditions and human rights violations. They are demanding regime changes. In Syria, the government is vowing to study popular demands as violence escalates in the southern city of Daraa, where 34 people reportedly have been killed in the last two days.

In Yemen, President Ali Abdullah Saleh is promising a dialogue with the protesters and to hand over authority systematically. He also is promising constitutional reforms and parliamentary elections, but anti-government protests and violence continue.

Egypt has already achieved regime change, but many are now questioning the direction of the revolution. Some of those whose protests yielded the ouster of President Hosni Mubarak are upset with a proposal by the ruling military to ban protests that ŌĆ£conflict with productivity.ŌĆØ Some are calling for demonstrations to protest the new law.

One shot at Indiana school┬Ā- Details have yet to emerge about a shooting at a middle school in Martinsville, Indiana. The Morgan County Sheriff's Department said at least one person was shot and one person was in custody after the shooting at West Middle School. The motive for the shooting was not immediately clear, and there has been no word on the condition of the victim, who was flown to a hospital. CNN will bring you the details as they become available.