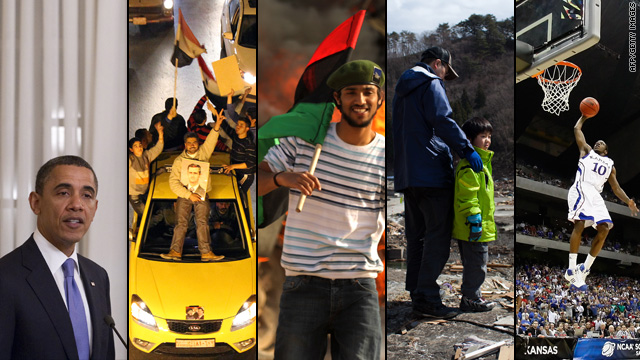 NATO agreed on Sunday to take military command of a coalition mission over Libya, including enforcement of a no-fly zone, but questions remain over how long and far the intervention will go as rebels push back forces loyal to Libyan leader Moammar Gadhafi.Â Here is a look at this and some of the other stories CNN plans to follow this week:

The new NATO mandate will begin in two to three days, NATO officials said, taking leadership over the military mission as the U.S. government had wanted. Planes and missiles from a coalition led by the United States, the United Kingdom and France began attacking Libyan air-defense targets March 19 in part to establish a no-fly zone. It was authorized by a U.N. Security Council resolution, which approved military action - short of occupation - to prevent Gadhafi's forces from attacking civilians and cities.

The intervention comes amid a Libyan civil war, which began in mid-February after clashes between government forces and protesters. Opposition forces are seeking the ouster of Gadhafi, who has ruled for nearly 42 years. Buoyed by the coalition's air intervention - including airstrikes on military vehicles - rebels are advancing west from their strongholds in eastern Libya, pushing pro-Gadhafi forces out of cities they had captured days earlier.

Leaders from NATO members, the African Union and the Arab League are expected to meet in London on Tuesday to discuss the intervention's aims. U.S. Secretary of State Hillary Clinton is among those expected to represent the United States at the meeting.

Obama to give address on Libya Monday night

U.S. President Barack Obama is expected to address the coalition military action in Libya during a nationally televised address at 7:30 p.m. ET Monday. The speech follows calls for Obama to explain why U.S. forces are involved in the conflict and what the American exit strategy is. Two days following Obama's speech, Clinton and U.S. Defense Secretary Robert Gates are due to give Congress a classified briefing on the Libyan situation. Members of Congress have been pushing the administration for details not only about the mission's overall strategy and goals, but also for estimates on how much the operation is going to cost.

Syrian President Bashar al-Assad is expected to address his nation soon amid reports of protesters being shot to death as they called for government reforms. A source close to the government told CNN the country's emergency law - in effect for nearly 50 years - is about to be lifted, and that the Cabinet is expected to resign in days as al-Assad decides on a new prime minister.

Government security forces are alleged to have opened fire on protesters last week in the southern Syrian cities of Sanamen and Daraa, and anti-government protesters in Latakia also were wounded by gunfire on Saturday, according to witnesses. The government has blamed the Latakia shootings, which it said led to the deaths of 10 security force members and civilians, on armed gangs, according to state TV.

In Yemen, another country where deadly violence has surrounded anti-government protests, the president is fighting to retain power, arguing he is best equipped to lead a fight against Islamists and against members of al Qaeda in the Arabian Peninsula. Over the past two days, fighting between Yemeni security forces and al Qaeda members has left people on both sides dead, Yemeni security officials said. The country has been engaged in a U.S.-aided crackdown on al Qaeda operatives.

Yemen - like many Middle Eastern and North African countries this year - has been facing protests from people citing government corruption, a lack of political freedom and high unemployment. Calls for President Ali Abdullah Saleh's ouster increased following revolutions in Egypt and Tunisia, and he has responded by promising to to run in the next election, and accepting demands for constitutional reforms and new parliamentary elections, though opposition leaders still are pushing for his immediate removal.

Check this page for a roundup and explanations of unrest in the Middle East and North Africa.

A few hours ago, the plant's owner said radiation levels in coolant in a reactor turbine there are extremely high -Â 100,000 times normal levels for reactor coolant - but added that an earlier reading ofÂ 10 million times normal was incorrect.

Nuclear analyst Joe Cirincione told CNN's "State of the Union" on Sunday that the situation still is very serious. "You have six nuclear reactors lined up in a row. ... Any one of these would be considered a serious situation, but the fact that you have all of them in critical condition at this same time makes this a uniquely challenging situation.

"We have the possibility in three of those reactors ... of meltdowns. At least partial meltdowns are already under way in ... the fuel rods of those cores. And then in (a) fourth reactor, the core was taken out and put in the spent-fuel pond, and there, jammed in with other fuel, is a possibility that that could melt or catch fire."

The U.S. Congress returns from a recess this week, ready for a new round of battles over an old problem - how to fund the federal government for the rest of fiscal year 2011.

With Republicans and Democrats disagreeing over how much to cut spending levels, they have managed to pass only temporary spending measures, the most recent of which is set to expire on April 8. If a new plan isn't approved by then, some government services and offices would shut down until a plan is agreed.Â Republicans are pushing for about $61 billion in cuts overall, while Democrats say they will accept only a fraction of that.

Former U.S. President Jimmy Carter is expected to visit Cuba and its president, at the invitation of the Cuban government, on Monday to discuss that country's economic policies and ways to improve U.S.-Cuba relations. The three-day trip has sparked speculation that he could try to secure the early release of USAID contractor Alan Gross, who recently was sentenced to 15 years in a Cuban prison. The United State says Gross was helping Cuba's Jewish community connect to the internet, but Cuba says he was part of a plot to use illegal internet connections to destabilize the government.

Final Four in Houston on Saturday

The field for the NCAA men's basketball Final Four is set, and it's a good bet that you didn't correctly predict all four semifinalists when you filled out your bracket two weeks ago. Virginia Commonwealth, which barely even got into the tournament as a No. 11 seed in its region, will appear with last year's runner-up, Butler; Kentucky, a No. 4 seed that took out much-fancied higher seeds in Ohio State and North Carolina; and Connecticut. Check out full coverage at SI.com.