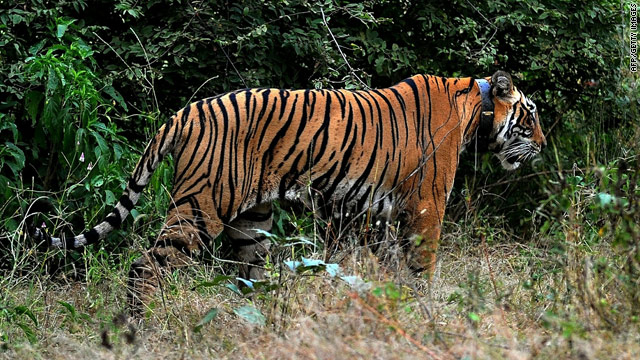 The wild tiger population in India, home to half of the wild tigers in the world, has increased almost 14% in the past three years, a new census shows.

There are now an estimated 1,706 wild tigers in India, according to the count from Indiaâ€™s National Tiger Conservation Authority, which cooperated with the World Wildlife Fund, among other partners, in doing the study.

â€śThese numbers give us hope for the future of tigers in the wild, and that India continues to play an integral role in the tigerâ€™s recovery,â€ťÂ  WWF International Director General Jim Leape said in a statement.

"Recovery requires strong protection of core tiger areas and areas that link them, as well as effective management in the surrounding areas,â€ť added Mike Baltzer, head of WWFâ€™s Tigers Alive Initiative. â€śWith these two vital conservation ingredients, we can not only halt their decline, but ensure tigers make a strong and lasting comeback.â€ť

The WWF said the count was the largest survey of wild tigers ever attempted.

It was released at the opening of the International Tiger Conservation Conference, a three-day meeting that began Monday in New Delhi. Thirteen nations and various environmental organizations are represented.

The conference is a follow-up to November's tiger summit, hosted by Russian Prime Minister Vladimir Putin in St. Petersburg, Russia. At that time, officials set up the Global Tiger Recovery Program, designed to boost a species that has seen its numbers in the wild shrink by 94% in the past century, the WWF said.