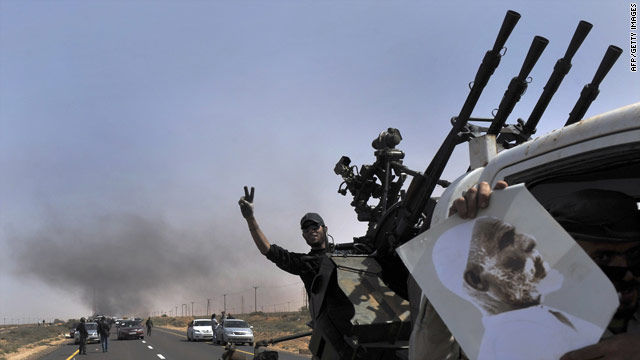 Khamis Gadhafi abruptly cut off his visit and returned to Libya, where he has led the 32nd Reinforced Brigade, known at the Khamis Brigade, in its  suppression of rebel forces.

The brigade's headquarters was the target of six Tomahawk missiles overnight, according to Vice Adm. William Gortney of the Joint Staff.  Libya's state TV on Monday night broadcast live footage from Gadhafi's Tripoli compound of Khamis dressed in uniform and greeting people. Prior to the broadcast there had been unconfirmed reports that the younger Gadhafi had died from injuries he suffered when a plane flown by a disgruntled Libyan pilot crashed into a military compound while he was there.

[7:55 p.m. Monday ET, 1:55 a.m. Tuesday in Libya] The world had a "unique ability to stop" violence "on a horrific scale" in Libya by acting in a broad coalition with the support of Arab countries, U.S. President Barack Obama said in his televised address on Libya.

"I am convinced that a failure to act in Libya would have carried a far greater price for America," he said.

He also said that while there is no question that Libya would be better off without Moammar Gadhafi as leader, the United States will actively pursue his ouster through non-military means. But broadening the military mission "to include regime change would be a mistake," Obama said.

The transition to a "legitimate government" in Libya is "a task for the international community, and more importantly, a task for the Libyan people themselves," Obama said, adding: "If we tried to overthrow Gadhafi by force, our coalition would splinter."

[7:38 p.m. Monday ET, 1:38 a.m. Tuesday in Libya] - U.S. President Barack Obama, addressing the Libyan situation in a televised speech, said he ordered U.S. warships into the Mediterranean off Libya because of Libyan leader Moammar Gadhafi's "brutal repression" of his people and "a looming humanitarian crisis."

"It was not in our national interest" to let the citizens of Benghazi - a rebel stronghold on which pro-Gadhafi forces were advancing before coalition airstrikes - suffer a massacre at the hands of Gadhafi's forces, Obama said. It would have "stained the conscience of the world," he said.

[7:03 p.m. Monday ET, 1:03 a.m. Tuesday in Libya] Pro-Gadhafi forces say they have taken control of the entire western Libyan city of Misrata after days of fighting there, but rebels say they still control the center of the city. The Libyan government has escorted journalists, including CNN's Nic Robertson, to Misrata, but not to the city's center.

In the video below, Robertson describes seeing signs of heavy fighting in Misrata, including "mile after mile of damage" and "tanks hiding under trees at the side of the road."

[6:43 p.m. Monday ET, 12:43 a.m. Tuesday in Libya] Since the coalition military operation began more than a week ago, the United States' "unique capabilities" have been referred to time and time again by U.S. officials, from President Barack Obama to Secretary of State Hillary Clinton. CNN's Jennifer Rizzo takes a look at those capabilities - military tools that other coalition and NATO countries do not, or do not have as much of, including surveillance and communication jamming capabilities.

[5:31 p.m. Monday ET, 11:31 p.m. in Libya] The U.S. military already has reduced its day-to-day presence in the coalition military operation above and around Libya, according to a defense official.

"Some of the ships have peeled off, but are still in the region," said the official, who declined to be identified because of the sensitivity of the mission. At least two of the ships involved in the initial phase of establishing the no-fly zone over Libya - which began March 19 - are no longer involved in day-to-day operations, the official said.

NATO is beginning to take command and control of the no-fly zone. However, it could take until Thursday or Friday for the organization to take over the entire mission mandated by a March 17 U.N. Security Council resolution. That resolution authorized the no-fly zone's creation and the protection of civilians.

[4:37 p.m. Monday ET, 10:27 p.m. in Libya] U.S. Navy Vice Adm. Bill Gortney said at the Pentagon Monday that the United States is not working in direct support of opposition forces in Libya.

"We're not coordinating with the opposition," he said, adding that any gain it makes is "tenuous."

Gortney's comments come after Russian Foreign Minister Sergey Lavrov complained Monday that airstrikes by an international coalition including the United States seemed to expand beyond the scope of a U.N. resolution. That resolution, approved on March 17, created a no-fly zone above Libya and mandates the protection of civilians.

"There are reports - which go undenied - that the air forces of the coalition conduct airstrikes on (Libyan leader Moammar) Gadhafi's troops and support the military actions of rebels. There is an obvious controversy there," Lavrov told reporters in Moscow. "We believe that the interference into what is, essentially, an internal civil war is not sanctioned by the U.N. Security Council resolution."

[4:31 p.m. Monday ET, 10:31 p.m. in Libya] U.S. Navy Vice Adm. Bill Gortney said at the Pentagon Monday that there have been no confirmed reports of civilian casualties in Libya as a result of coalition activity.

On Monday, Libyan state television displayed images of injured people in a hospital and destroyed buildings as it reported that civilians were wounded when bombs struck the central Libyan city of Sabha. CNN was unable to independently verify that report.

U.S. Defense Secretary Robert Gates on Sunday said America had "intelligence reporting about Gadhafi taking the bodies of the people he's killed and putting them at the sites where we've attacked."

[4:10 p.m. Monday ET, 10:10 p.m. in Libya] Hours ahead of U.S. President Barack Obama's nationally televised addressed on the situation in Libya, Senate Minority Leader Mitch McConnell said that "if the American people are uncertain as to our military objectives in Libya, it's with good cause."

"What national security interest of the United States justified the risk of American life?" McConnell, R-Kentucky, asked. "What is the role of our country in Libya's ongoing civil war?"

Obama's speech follows calls from across the political spectrum for him to clarify America's role in the U.N.-authorized military mission in Libya.

[3:14 p.m. Monday ET, 9:14 p.m. in Libya] U.S. intelligence sees signs that some of those who are "relatively close to the Libyan leader are questioning whether he has staying power," a U.S. official says, according to CNN's Pam Benson.

American intelligence has seen indications that the "morale of Gadhafi forces is on the decline" as rebels have made significant gains over the past week, the official said.

As they moved into Umm el Ghindel - near Sirte, Gadhafi's birthplace - they began searching some homes and found that Gadhafi's forces had armed residents in the area, rebels said.  As they were talking to residents, asking them to join the opposition, gunfire broke out.  Rebels told CNN they refused to fire back and began a hasty retreat.  A stream of vehicles could be seen fleeing the area.

[1:21 p.m. Monday ET, 7:21 p.m. in Egypt] Egypt's military rulers reduced a nationwide curfew so that it applies from 2 a.m. to 5 a.m. as of Monday, said Maj. Mohamed Askar, a spokesman for the Egyptian military.

[12:36 p.m. Monday ET, 7:36 p.m. in Yemen] At least 121 people were killed and 45 injured in an explosion at an ammunition factory in southern Yemen on Monday, medical sources said.

The death toll was expected to rise, said the sources, who asked that they not be identified because they are not authorized to speak to the news media.

The blast comes after months of demonstrations against Yemen's President Ali Abdullah Saleh, and a weekend of violence between government forces and the local al Qaeda group.

A Syrian official said the journalists were detained and questioned because they did not have a permit to work in Syria and had filmed "in an area where filming is not permitted."

The two traveled to Syria on Thursday to cover the unrest in the country, according to Reuters. Until their release Monday, television producer Ayat Basma and cameraman Ezzat Baltaji were last heard from on Saturday, when they sent a message to a colleague saying they were about to leave Syria for Lebanon, the news agency said.

[11:13 a.m. Monday ET, 5:13 p.m. in Syria] An "extraordinary number" of security forces flooded the Syrian city of Daraa on Monday, patrolling streets and guarding government buildings in an apparent attempt to stave off further protests, a political activist in the city told CNN.

The city is extremely tense and "people are sitting at home scared watching the updates on TV," said Aman Aswad. He said thousands of troops were deployed in the city, guarding government buildings, major streets and the city gates.

At least 37 people have died in violent protests since last week in Daraa, according to the U.N. Office of the High Commissioner for Human Rights.

But Syria's state-run news agency denied reports that security forces had fired on protesters Monday. The reports are "completely false," the agency reported on its website, citing an official government source.

[9:49 a.m. Monday ET, 3:49 p.m. in Libya] NATO's secretary general ruled out arming Libyan rebels Monday, as the alliance continued to take over command and control of the entire Libyan mission.

The first NATO sorties to implement the no-fly zone over Libya flew on Sunday, NATO officials said.  NATO expects to have complete command and control of all aspects of the Libyan mission by week's end, allowing the United States to step out of its lead role and more into a supporting one, as requested by the Obama administration.

In an interview with CNN at NATO headquarters, Anders Fogh Rasmussen said, "The U.N. mandate authorizes the enforcement of an arms embargo," and that NATO has decided to participate.

"We are not in Libya to arm people, but to protect people," he said.

[9:19 a.m. Monday ET, 3:19 p.m. in Egypt] Voters in Egypt will elect members of parliament in September and cast ballots for president sometime after that, a member of the ruling military council said Monday. Gen. Mamdou Shahen said the elections would not be held under Egypt's emergency law, though he did not specify when the law would be lifted.

[9:03 a.m. Monday ET, 3:03 p.m. in Libya] Libyan opposition fighters continued their march west Monday with a key target in their sights: Sirte, Moammar Gadhafi's birthplace. Rebel forces claimed to have gained control Ras Lanuf on Sunday. The opposition also appeared to have taken control of the key oil town of al-Brega.  Victories in those cities marked a comeback for the ragtag group of amateur soldiers who are unified by one mission: toppling Gadhafi's nearly 42-year rule. On Monday, opposition troops and Gadhafi's security forces battled over the town of Nawfaliyah.  Opposition forces told CNN they had gained control of the city.

[8:11 a.m. Monday ET, 3:11 p.m. in Yemen] At least 40 people were killed and 90 wounded in an explosion at an ammunition factory in Yemen on Monday, medical and security officials said. The dead and and wounded were mainly locals who were ransacking the factory after it was taken over by militants on Sunday, security officials said. The explosion took place in Abyan Province in southern Yemen, they said.