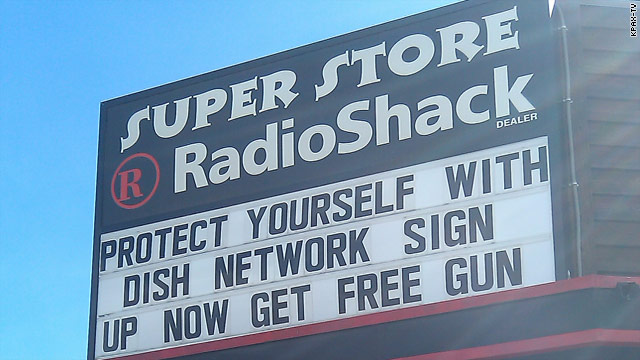 The sign says it all: “Protect yourself with Dish Network. Sign up now. Get free gun.” (The real marquee has no periods, so I took a little punctuative license.)

Owner Steve Strand told the Ravalli Republic that the promotion “really, really fits the Bitterroot Valley,” while manager Fabian Levy told the newspaper that the gimmick had “been really successful.”

Strand said the promotion, which began in October, has tripled his business and lured hundreds of people curious about the sign. Only one person who “didn’t understand how it works” has reacted negatively, he said.

“We have people literally stop in to take pictures of the sign,” Levy added.

If you don’t want a gat or can’t pass the background check (which the Republic reports is also free with the satellite TV subscription), you can still have a $50 Pizza Hut gift card.

“They've never had a gun promotion before, so they're a little nervous about it,” Strand said. “It's been an uphill battle with Dish.”