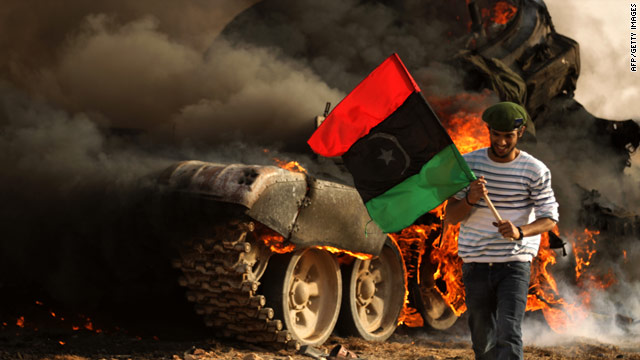 A Libyan rebel holds the Kingdom of Libya flag and smiles near a burning government tank Saturday in Ajdabiya, Libya.
March 29th, 2011
08:13 AM ET

Libya - Forces loyal to Libyan dictator Moammar Gadhafi blocked the westward advance of rebels, who have been aided by air power provided by the U.S., NATO and their allies. Secretary of State Hillary Clinton will meet in London today with other world leaders to try to strengthen the coalition's efforts.

Meanwhile in Washington, politicians and pundits are parsing President Obama's speech Monday night, in which he explained the reasoning behind and scope of U.S. involvement in the Libyan conflict.

Syria - Thousands of demonstrators marched in Amman in support of President Bashar al-Assad, who has been the target of protests. Confrontations between anti-government protesters and police have been bloody at times; at least 37 people have been killed since last week, according to the U.N. Office of the High Commissioner for Human Rights. Security forces flooded the restive cities of Daraa and Latakia on Monday, patrolling the streets, protecting government buildings and in at least one case clashing with protesters, according to witnesses..

Japan - Engineers and workers are carrying out a dangerous balancing act as they try to cool the damaged Fukushima Daiichi nuclear reactor with water, but not so much water that it spills over, presenting an additional hazard. Radioactive isotopes from the damaged reactor are being detected in more places in the United States, though the Environmental Protection Agency says they pose no threat to human health. A Senate committee will hold a hearing today to gather information on the accident in Japan.

Wal-Mart - The U.S. Supreme Court will hear arguments today in a huge sex-discrimination lawsuit brought by female workers against Wal-Mart Stores Inc., the nation's largest retailer. The arguments will not be on the merits of the case, but on whether to allow as many as 1.6 million potential plaintiffs to join a single lawsuit. Billions of dollars and many thousands of career paths are at stake.

Immigration - Emily Ruiz, a 4-year-old U.S. citizen, was denied entry to the United States on March 11 when she returned with her grandfather to Dulles International Airport near Washington after an extended stay in Guatemala. The girl's parents are undocumented workers in New York; her grandfather had an old immigration violation, which prompted border agents to send him and the girl back to Guatemala. Emily will try to enter through New York today, a lawyer for the family says.

4:15 pm ET June 12, 2021 RETWEET
This retired teacher found her passion while birding. Now she wants to make it more accessible to all.â€twitter.com/i/web/status/1â€¦bO
cnni