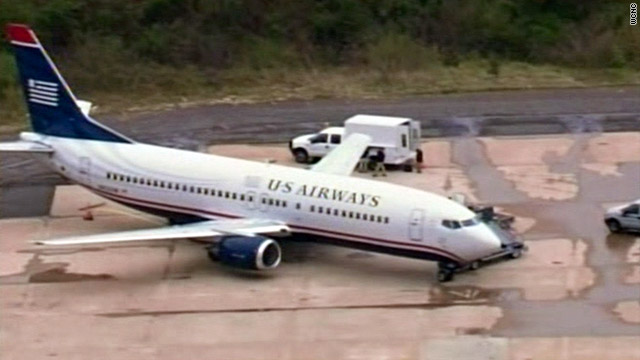 This US Airways 737 was grounded in Charlotte, North Carolina, on Monday after a small hole was found in its fuselage.
March 29th, 2011
04:24 PM ET

Sources: Hole in US Airways jet caused by bullet

A hole in a US Airways jet that landed in Charlotte, North Carolina, on Monday was caused by a bullet, two government sources tell CNN.

The sources say a bullet has been recovered inside the Boeing 737-400.

The aircraft had flown to Charlotte from Philadelphia and was being prepped for another flight on Monday when the pilot discovered the hole above a passenger window toward the back of the plane, according to airline officials. The airline pulled the plane from service and called in the FBI.

One source told CNN that officials believe the bullet was fired in Charlotte after passengers had exited the aircraft.