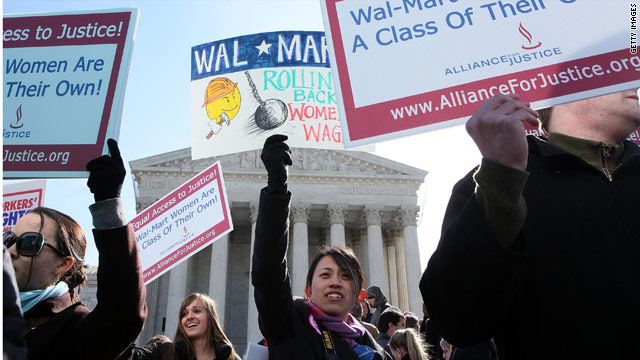 The Supreme Court's conservative majority didn't appear impressed Tuesday with plaintiffs' arguments that more than 1 million female Wal-Mart workers, past and present, should be able to accuse the retailer of discrimination in one class-action lawsuit, CNN senior legal analyst Jeffrey Toobin said.

Though a ruling isn't expected until late June, the justices' reactions during oral arguments might portend a defeat for six plaintiffs who want to band with employees from across the country and make their accusations in a single, massive trial, Toobin said.

"I thought it was a very good day in court for Wal-Mart, and I would not be at all surprised if the whole case were thrown out after listening to the justices today,” Toobin said on "CNN Newsroom."

The Supreme Court is deciding whether the original lawsuit, in which six female Wal-Mart workers allege systemic discrimination in which the retailer paid women less than men and gave women fewer promotions, can be given class-action status.

A decision to allow such a large suit, with nearly 1.6 million potential plaintiffs, would represent an enormous litigation risk for Wal-Mart Stores Inc. Should Wal-Mart lose such a suit, it could face tens of billions of dollars in damages.

Both sides concede that Wal-Mart has official policies barring discrimination against women and  listing diversity as an important value, Toobin said.

"What the plaintiffs' lawyers were saying (Tuesday) was that that policy was so vague that it gave local, individual store managers the opportunity to discriminate against women," Toobin said. "The more conservative justices on the court were saying, 'Well, if that’s the case, how can you try them all together? Because each store had a different set of circumstances. How can you do a class action when the policy is a fair one, a good one, and it’s only the individuals who were possibly discriminated against?'"

A decision to allow a class-action suit might lead Wal-Mart to try to settle the case to get the "enormous risk off its books," Toobin said.

"But after today, I think Wal-Mart will be a lot less willing to settle, because it looks like much or all of the case may be thrown out by what is an increasingly conservative Supreme Court," Toobin said.