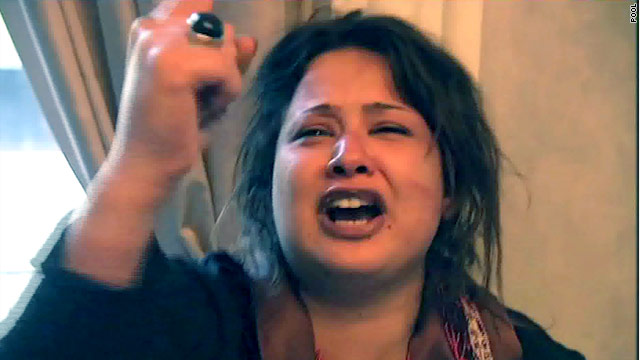 Eman al-Obeidy shouts to international journalists on Saturday that she was raped by Gadhafi's brigades.
March 29th, 2011
12:55 PM ET

Her location remains unknown days after she burst into a Tripoli hotel that houses foreign journalists, screaming that she had been raped for days by Moammer Gadhafi's brigades. Al-Obeidy was heavily bruised and bleeding, hysterical and crying during the incident on Saturday. Watch the scene. Libyan officials roughly led her out of the hotel after a violent scuffle with journalists who were trying to protect her. She was forced into a car and driven away and has not been seen since. On Tuesday, the men accused of raping al-Obeidy filed counter-charges against her for slander, a Libyan government spokesman told CNN. Watch CNN's Nic Robertson report this development. Al-Obeidy's mother said Monday that her daughter is being held. But the Libyan government claims al-Obeidy was released and is at home with her family. When al-Obeidy was being rushed out of the hotel by Libyan authorities, she shouted to journalists that if they didn't see her again, "then that's it!" CNN photojournalist Khalil Abdallah, who witnessed the violence at the hotel, said he fears for the woman's safety. When the Libyan authorities told reporters that they would see her again, Abdallah recalled, "We have been told that we'd see people again, but we never do."

The Libyan professor taught economics at the University of Washington but is now in Libya appointed to the opposition's shadow government as finance minister. Tarhouni, 60, returned to the war-torn country a month ago. He had been exiled for the past 35 years. Tarhouni discussed with journalists challenges that the opposition movement faces. "The process was and is very chaotic," he said. His students were stunned by the sudden departure of their instructor, the Seattle Times reports.

The Wal-Mart greeter is the plaintiff whose discrimination claims against Wal-Mart have reached the U.S Supreme Court. Oral arguments begin Tuesday in the case which is the largest class-action employment lawsuit in U.S. history. Dukes and other accuse Wal-Mart of discriminating in pay and promotions based on employees' gender. Dukes worked for Wal-Mart since 1994. She said she was paid significantly less than men with less seniority who were performing similar work, and that she was passed over for several managerial promotions.

If you think that glass of wine is good for you, it's time to reconsider | Opinion cnn.it/3KFaJeX
cnni

12:30 am ET January 24, 2022 RETWEET
Adele FaceTimed a group of fans after the singer had to postpone her Las Vegas residency. cnn.it/3FVdntd https://t.co/bddfiKwRqK
cnni