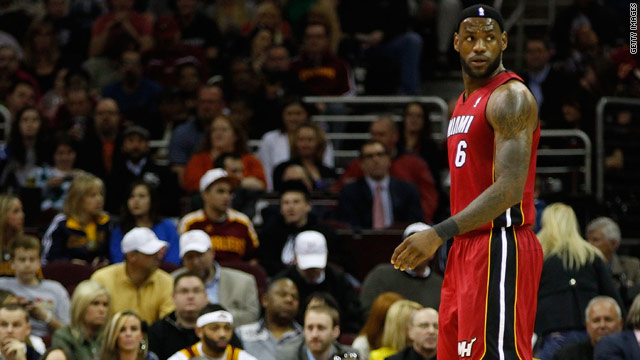 On his second visit to Cleveland Tuesday since he took his talents to South Beach, the Miami Heat's LeBron James found no place to park and no victory on the court.

The former Cavaliers star and reigning NBA MVP was booed every time he touched the ball in Quicken Loans Arena, and though he posted a triple-double - 27 points, 12 assists and 10 rebounds - it was not enough to bring down the Cavs, who posted a 102-90 win.

"I'm in awe of the fans of Cleveland," The Plain Dealer quoted Gilbert as saying on his way out of the building. "They stood behind this team all year."

While the Cavs game James' team fits on the court, Gilbert's staff gave James fits on his way into the arena Tuesday, ESPN.com reported.

When James and his entourage arrived in a two-car convoy for the Heat's morning shootaround, ESPN reported, arena staff denied the vehicles entry to the arena's underground parking garage.

James left, returned later sans his associates, and was granted access, according to the ESPN report. A Cavs' official told ESPN that visiting players are not usually given private car access to the garage.

While the incident didn't seem to rattle James on the court Tuesday night, it did provide some Twitter fodder for Gilbert.

"Not in our garage!!" he tweeted after the win, according to ESPN.

One of Haiti's most powerful gangs is believed to be behind the kidnapping of 17 American and Canadian missionariesâ€twitter.com/i/web/status/1â€¦g6
cnni

3:03 am ET October 18, 2021 RETWEET
What we eat is one of the biggest ways we contribute to the climate crisis. From eating less meat to reducing yourâ€twitter.com/i/web/status/1â€¦7X
cnni

2:53 am ET October 18, 2021 RETWEET
At least 22 people have been killed and two remain missing after heavy rain triggered floods and landslides in soutâ€twitter.com/i/web/status/1â€¦t6
cnni

2:42 am ET October 18, 2021 RETWEET
The Banksy painting that partially self-destructed at auction three years ago has sold once more, for a staggeringâ€twitter.com/i/web/status/1â€¦oT
cnni