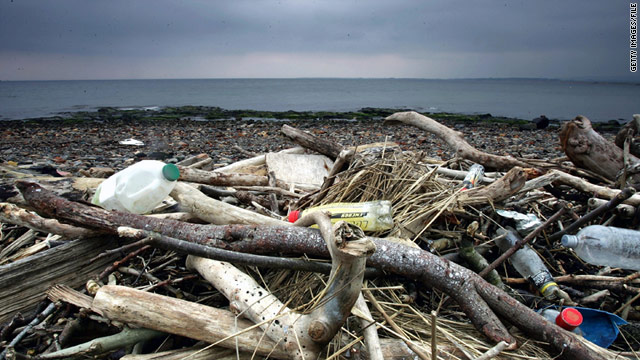 Scientists have found an organism that may be eating plastic in the ocean, according to a report in Nature News.

But whether the bug is green or mean remains to be seen, a scientist told CNN on Wednesday.

It has been proven that microbes can degrade plastic, said marine microbiologist Tracy Mincer of the Woods Hole Oceanographic Institution in Massachusetts. What's significant is that the plastic is being degraded in a nutrient-poor area of the sea, an "ocean desert," Mincer said.

The bacteria, found in a region of the North Atlantic Ocean called the Sargasso Sea, is clearly breaking down the plastic, but scientists don’t know if the byproduct is environment-friendly waste or a toxin. If the bacteria - or its waste - is consumed by larger organisms, the effects could be detrimental to aquatic life.

Examining items such as a fishing line and plastic bag, Mincer discovered the living cells entrenched in the plastic, seemingly gorging on it, he told Nature News.

In any event, the findings suggest the vast "garbage patches" that have been found in parts of the world's oceans and considered largely devoid of life may be full of living communities.

"We are seeing the plastic particles as a type of artificial reef that certain types of microbes can colonize," Mincer said. "Since plastic has a much longer residence time in the water column than any other natural particle in the water column, this could be making a significant impact."

The discovery of environs that encourage plastic-eating bacteria raises larger questions about the organisms'  toll on other aquatic life, Mincer said.

"One of the questions that I am interested in is: How does this artificially introduced plastic that is heavily colonized by microbes influence the rest of the water column microbial balance?" he asked.

The part of the Sargasso Sea that scientists studied is depleted of phosphorous and other nutrients, Mincer said.

"In other words, are the plastic colonizers stealing away phosphorous from others that would normally be receiving this share?"

Russia’s “partial mobilization” for its war in Ukraine is off to a chaotic start amid protests, drafting mistaktwitter.com/i/web/status/1…qAJxXXr0
cnni

4:45 am ET September 25, 2022 RETWEET
Director James Cameron shares details on how the upcoming film “Avatar: The Way of Water” is different from the otwitter.com/i/web/status/1…YVO269
cnni

4:30 am ET September 25, 2022 RETWEET
Men aged 18 to 60 across Russia are now facing mobilization as reservists to fight Putin’s war of aggression in Ukrtwitter.com/i/web/status/1…zKoZ
cnni

4:00 am ET September 25, 2022 RETWEET
When the end came neither Roger Federer or Rafael Nadal could hold back the tears cnn.it/3DOxcoR
cnni