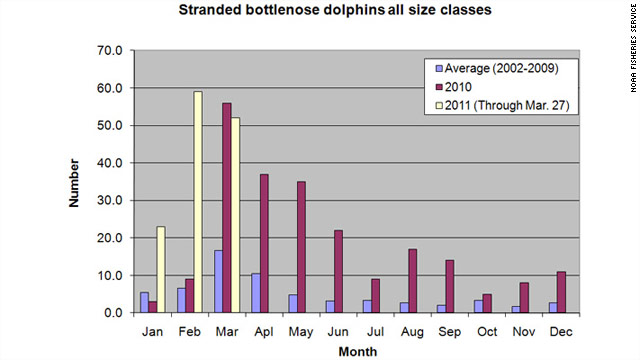 A NOAA Fisheries Service graphic illustrates the sharp rise in Gulf of Mexico dolphin deaths that began even before the oil spill.
March 31st, 2011
02:43 PM ET

For every dead dolphin or whale that washes up on Gulf Coast beaches, there may be 50 more that no one ever sees, a new study suggests.

Natural factors and last year's oil spill in the Gulf of Mexico probably have caused thousands more dolphin and whale deaths than have been observed, a team of scientists says in a study published Wednesday by the journal Conservation Letters.

The scientists, led by Rob Williams, said 101 cetacean, or marine mammal, carcasses had been observed in the water or on beaches as of the time of their study.

After analyzing historical data on populations and death rates of 14 species in the northern Gulf, the scientists determined that carcasses are found in only 2% of cetacean deaths.

"Thus, the true death toll could be 50 times the number of carcasses recovered, given no additional information," they write, adding that they don't know what the true figure is.

The scientists urge environmentalists and authorities not to rely solely on observed carcass counts in judging the severity of an event, but to develop standard formulas for more accurate estimates.

Scientists and observers have been alarmed by the high number of dead baby and preterm dolphins that washed ashore in February during the first calving season since the spill.

The National Oceanic and Atmospheric Administration's Fisheries Service counted 36 infant dolphin strandings in February; there was just one in February 2010, and the 2002-2007 average for February is 2.2. Stranding is the scientific term for marine mammals that end up on land.

NOAA had noticed a rise in cetacean deaths even before the spill which resulted from an April 20 explosion and fire on the Deepwater Horizon oil rig that killed 11 workers.

"We have been monitoring an increase of dolphin deaths in the northern Gulf since February of 2010," NOAA Fisheries spokeswoman Karrie Carnes said.

"Frankly, it's just too early to tell at this point," Mase said in February. "It's obviously on everyone's radar screen. Everyone's concerned about any impact of the BP oil spill, but we have to be very cautious as to identify any particular cause. We won't know until we have these samples analyzed and be able to identify the source."