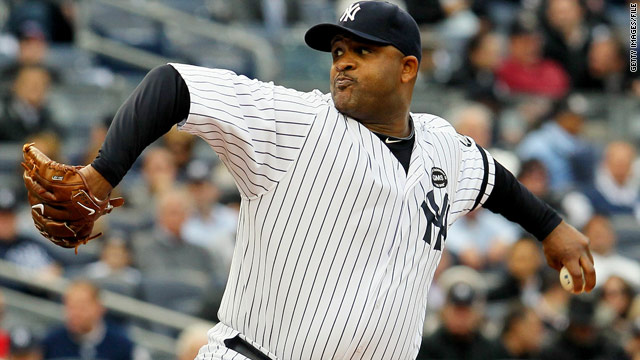 C.C. Sabathia is the Opening Day starter for the New York Yankees against the Detroit Tigers today.
March 31st, 2011
06:07 AM ET

Opening Day: The first pitches of the 2011 Major League Baseball season are at 1:05 p.m. ET today as the Washington Nationals host the Atlanta Braves in the National League and the New York Yankees welcome the Detroit Tigers in the American League.

Check out the predictions of SI.com experts for the season, and see SI.com's predictions right through the 2011 World Series as well as Tom Verducci's video previews of what to expect from each Major League team.

MegaMillions winners: The winner or winners of a $319 million MegaMillions lottery jackpot are expected to be announced during a press conference at 10:30 a.m. today, said New York Lottery spokeswoman Carolyn Hapeman.

They are rumored to be seven IT specialists from New York state's Division of Housing and Community Renewal, said Emanuel Biondi, a public employees federation council leader for the agency.

The rally comes eight days before Congress' most recent temporary spending measure is set to expire. If a new plan isn't approved by April 8, some government services and offices would shut down until a plan is agreed.

Republicans are pushing for about $61 billion in cuts overall, while Democrats say they will accept only a fraction of that.

Studies have long shown that getting high can harm cognitive function. Now, a new review of research, published Thuâ€twitter.com/i/web/status/1â€¦nE
cnni

6:31 am ET January 23, 2022 RETWEET
Gunfire rang out from several military camps in Burkina Faso, the government said, but it denied the military had sâ€twitter.com/i/web/status/1â€¦n0
cnni

6:00 am ET January 23, 2022 RETWEET
A Turkish journalist has been sent to prison for "insulting" the nation's President Recep Tayyip Erdogan. cnn.it/3AnugMa
cnni

5:45 am ET January 23, 2022 RETWEET
A "once in a lifetime" rare blanket octopus has been spotted in Australia cnn.it/3fPuana https://t.co/nho2f7boHO
cnni