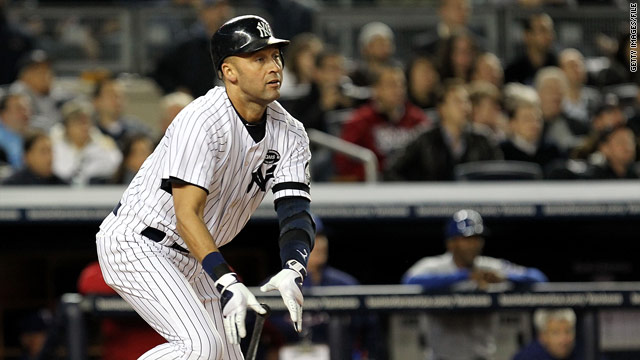 With Major League Baseball season ready to get into full swing, SI.com’s Tom Verducci breaks down the season’s top story lines that any baseball fan should be well aware of. Topping the list: How will Derek Jeter’s standing with the Yankees progress throughout the season, and is the Phillies’ time in the sun drawing to a close faster than people think?

The preseason was marked with the Jeter will-he-or-won’t-he contract drama, but ultimately the Yankees captain and shortstop chose to stay in pinstripes, signing a three-year, $51 million contract in December. More intriguing than Jeter’s contract negotiations was the worst offensive season performance of his career. The shortstop’s .270 batting average, .340 on-base percentage and .370 slugging percentage left some wondering if the Yankees legend had reached his peak.

In 2011, as Verducci points out, Jeter will be chasing the 3,000-hit mark, a milestone that will make him only the 28th player – and first Yankee – to reach it. But if his struggles from last season carry over into this year, the road to 3,000 could be an arduous one.

“Every hitless streak, however brief, launches questions about whether Jeter should be dropped in the lineup, rested more or moved to another position,” Verducci writes.

Jeter’s future aside, there may also be questions raised about the prowess of the Phillies’ rotation this season. While some are ready write Roy Halladay, Cliff Lee, Roy Oswalt and Cole Hamels into history alongside the 2003 Yankess All-Star pitchers Roger Clemens, Mike Mussina, Andy Pettitte and David Wells, that may not be the case.

“The NL East figures to be much tighter than last year, when the Phillies were six games better than Atlanta and 17 better than Florida,” Verducci writes. “The Phillies are an older team with no Jayson Werth and, for what could be a few months or more, no Chase Utley. Philadelphia's window could be closing faster than people think.”

341 – Number of birdies golfer Ryo Ishikawa made last year. He has pledged to donate 100,000 yen ($1,207) for every birdie he makes this season to victims of the earthquake and tsunami in Japan.

8 – Number of years that Matt Painter’s contract with Purdue will keep him at the school. Though he had spoken to Missouri about its coaching position, Painter opted to stick with his alma mater.