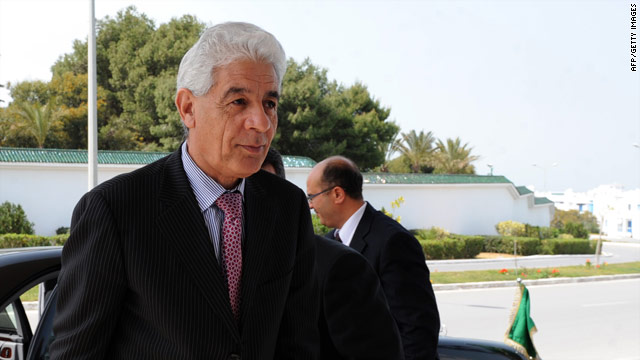 Moussa Koussa fled to London on Wednesday and said he had resigned as Libya's foreign minister.
March 31st, 2011
10:52 AM ET

Libya's foreign minister and its former intelligence chief shocked the diplomatic world Wednesday with his sudden defection to the United Kingdom.

According to CNN homeland security analyst Fran Townsend, Koussa played a key role in planning and executing the Pam Am 103 bombing over Lockerbie, Scotland, in 1988. He also was integral in negotiating the dismantling of Libya's weapons of mass destruction program.

"Koussa is one of the most senior figures in [Libyan leader Moammar] Gadhafi's government, and his role was to represent the regime internationally," a British government official said in a statement, "something that he is no longer willing to do."

Rolling Stone on Wednesday published the most revealing interview with singer Rihanna since her 2009 battery incident with then-boyfriend Chris Brown.

In a risquÃ© photo spread, the singer defined her self-imposed boundaries with Brown, despite agreeing to end a restraining order that she feels has hurt him professionally.

Most eye-opening however, was the singer's acknowledgment that she is prone to masochism in her sexual relationships, and via her multiple tattoos and piercings. She attributed it to verbal abuse from her father and the stress of her career.

"It's not something I am proud of, and it's not something I noticed until recently," she told Rolling Stone. "I think it's common for people who witness abuse in their household. They can never smell how beautiful a rose is unless they get pricked by a thorn."

The retired U.S. Air Force colonel has obtained what he believes is a copy of President Barack Obama's draft documents from 1980 by impersonating the president to the Selective Service Office.

According to a news report in the Colorado Springs Gazette, which was originally reported in the blog Gratewire, Hollister used a private investigator to obtain what may be the president's Social Security number, and then impersonated Obama to obtain the documents.

Further buoying Hollister's suspicions are reports that the Social Security number obtained begins with 042. That, says Hollister, would mean Obama was born in Connecticut, not Hawaii as long stated.

While critics say Hollister has violated many federal statutes, he maintains his innocence.

"I was very meticulous and made sure everything I did was compliant with the law," he told the Gazette.

A YouTube video posted March 14 by the 13-year-old from Westport, Connecticut, in which she speaks out about bullying, has gained nearly 50,000 views.

During her plea, Pollack says that name-calling is a large part of the problem. She emphasizes her point by writing the vulgarities on paper with crayon and showing them to her audience.

"I used to be really, really confident," Pollack says in the video, "and now, not so much because people use these words."

@marinemajor You say you are a retired deputy DA. So I hope that you know the law. You canâ€™t just shoot somebody fotwitter.com/i/web/status/1â€¦GquL
sarasidnerCNN

4:16 pm ET April 12, 2021 RETWEET
Please follow my colleague @abroaddus who is telling the story of #DaunteWright along side me. https://t.co/Y3GHydoMzI
sarasidnerCNN