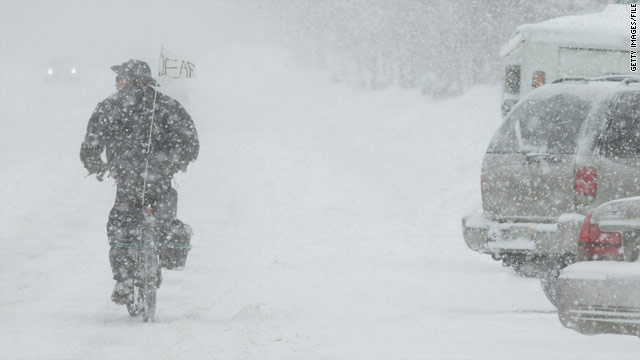 Snow is Greenfield, Massachusetts, was expected in January, but scenes like this could be repeated across the Northeast today.
April 1st, 2011
06:16 AM ET

On The Radar: Northeast snow; last prison of its kind; jobless report

Winter storm: It's no April Fool's Day joke - parts of the Northeast could get more than a foot of snow Friday as a nor'easter roars into the region.

The National Weather service has issued winter storm warnings for areas of Massachusetts, Maine, New Hampshire, New York and Vermont. As much as 14 inches of heavy, wet snow is possible in some areas, forecasters say.

Snow will stick to trees and power lines and,Â  with wind gusts of up to 30 mph, makes at least some power outages likely, the weather service said.

The prison, which once housed more than 1,200 inmates, has been in use for more than a century, but its island location makes maintaining too costly, officials said.

Statue honors Tucson girl: A statue of an angel in honor of the youngest victim of January's mass shooting will be unveiled in Tucson, Arizona, on Friday.

The 9-foot, 11-inch statue incorporates steel from the Pentagon and World Trade Center. The rocks at the base are from the crash site of Flight 93. The statue will live at the Little League field where Christina played baseball.

Jobs report: The Labor Department on Friday releases its monthly jobs report for March. A CNNMoney survey of 18 economists forecasts an addition of 180,000 jobs in March, with the unemployment rate unchanged at 8.9%.