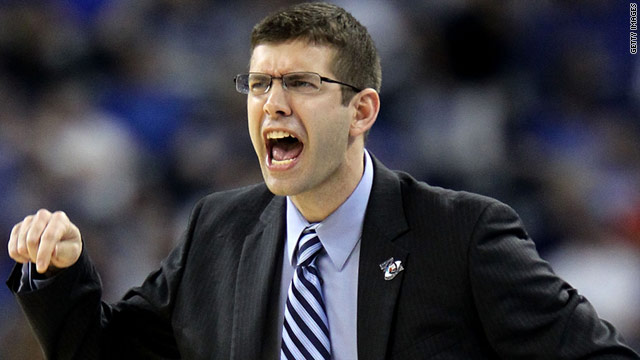 The Indiana native, who quit his corporate job in 2000 to take an unpaid coaching job at Butler, is in high demand at bigger schools, but told the Houston Chronicle, "I think you hear people say all the time that the grass is greener somewhere else. Well, I think we recognize the grass is very green at Butler."

One of Moammar Gadhafi's seven sons, the former professional soccer player firmly supports a proposal that would make his brother, Saif al-Islam, the country's leader overseeing a constitutional democracy, The New York Times reports. Saadi, who was once a military officer and a businessman, has traditionally leaned toward "Western-style economic and political openings," the Times says. In an interview with the NYT, a source close to the brothers said that they “want to move toward change for the country. ... They have hit so many brick walls with the old guard, and if they have the go-ahead, they will bring the country up quickly.”

The 58-year-old former academic was appointed prime minister by Syrian President Bashar al-Assad on Sunday. Safar, who has a doctorate in biotechnology, served as agriculture minister for eight years prior to his new appointment. He is expected to unveil his new cabinet in two or three days, the BBC reports. Syria’s government resigned last week during a wave of demonstrations that left dozens dead.

The former mayor of Atlanta on Sunday recounted to a congregation in Memphis, Tennessee,  the final minutes of the life of the Rev. Martin Luther King Jr., the Memphis Commercial Appeal reports. Young was with King in Memphis at the Lorraine Motel 43 years ago when King was shot on the balcony.  He told the congregation at New Olivet Baptist Church, "No one encouraged him to go to Memphis. He felt called to Memphis, as Jesus was called to Jerusalem and all the disciples did not want him to go. But he knew where he had to go and why he had to go."