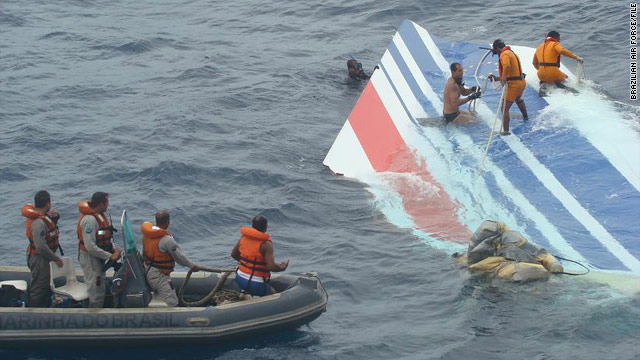 Air France wreckage found - Bodies have been found from an Air France flight that went down in the Atlantic Ocean almost two years ago. They will be brought to the surface and identified. A French official said Monday that the main part of the wreckage had been found. Previously, only chunks of the plane had been recovered. It went down in a remote part of the ocean, an estimated two to four day’s travel by ship from the nearest Brazilian or Senegalese port.

Radioactive water in Japan - Tokyo Electric Power Co., which owns the beleaguered Fukushima Daiichi nuclear plant in Japan, says it has no choice but to dump about 11,500 tons of radioactive water into the Pacific Ocean. Workers, meanwhile, are scrambling to plug an 8-inch crack that has been leaking water from the No. 2 reactor’s turbine building. To help mitigate the damage of releasing the radioactive water into the ocean, a silt fence will be installed along a damaged sea wall surrounding the plant, and a dye tracer will be injected into the water to track radioactive particles.

President kicks off campaign - It was expected, but President Barack Obama on Monday made it official: He will seek re-election. The president announced his bid in a short video on his website. He also unveiled one of his apparent campaign slogans: “It begins with us.” The campaign says the race for contributions has officially begun as well, and Obama is expected to hold his first fundraiser in his hometown of Chicago later this month.

NCAA - The Butler Bulldogs have done it again and are headed to their second consecutive NCAA title game Monday night - this time, against the UConn Huskies. The Huskies knocked off the Kentucky Wildcats and Butler toppled Virginia Commonwealth on Saturday to earn their shots at the title. Las Vegas has Butler as a three-point underdog, but by now, the Bulldogs are used to being called a Cinderella. They were underdogs in last year’s championship game and missed a shot with seconds left that would have sent the Duke Blue Devils home without a title.