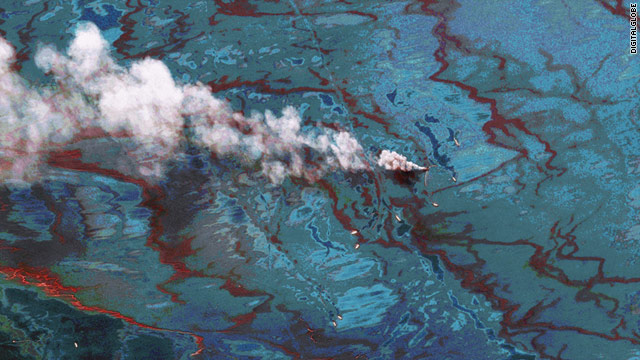 Comment of the day: "This story shouldn't have been tucked into the sidebar! I truly want to know how to stick it to this company. I already boycott BP, but I don't feel I have any direct consumer contact with TransOcean. Are we supposed to boycott gas in general? Then I don't get to work and they still have a million-dollar salary. Being angry feels so hopeless." - mkegrl

Top executives at Transocean Ltd., owner of the Gulf of Mexico oil rig that exploded, killing 11, have been awarded huge bonuses for 2010 . The company called 2010 “the best year in safety performance in our company’s history.” The president’s National Commission on the BP Deepwater Horizon Oil Spill and Offshore Drilling earlier found the company among those to blame for the disaster.

Just about all of our readers were appalled. whynot21 said, “I am speechless, absolutely speechless.” BD70 said, “Nothing like rewarding bad behavior.” PSMorganJr asked, “So how many people do they kill in an average year?” and Stewart2012 added, “God help us if TransOcean ever has a bad year.”

Some of our readers wanted to take action. scion101 said, “I'm in the mood to take a morning stroll to Wall Street, meeting every CEO there is, and hanging them by their own 'boot straps' on the lamposts until all the money they've taken from the poor and middle class falls out of their gold-lined pockets. Enough is enough.”

FlatlinerW5 said, “There's a simple solution: Stop buying their products. No demand equals no sales. No sales equals no profit. No profit equals no bonuses. It all depends on how willing you are to modify your lifestyle to destroy theirs.” randefi answered, “Unfortunately, oil is the blood of modern society. Nobody will voluntarily stop buying oil for any reason until there is a cheaper alternative.”

Many drew a connection between money and political power. globaldecay said, “With the tax cuts for billionaires just pushed through by Republicans they will be able to keep more of their 'hard earned' money. Steve Newman's extra tax cut alone (just the extra part, mind you) is more than a Wisconsin teacher makes in a year.” raiders12 said, “Median household income for the U.S. is around 48-50K; these clowns made 4-5 times that in ONE bonus for nearly ruining an entire region.” No9 said, “Revolting. we need to bring back the 90% tax bracket for the super-rich.”

raiders12 said, “Guys, it’s OK. The CEOs/execs don’t even see the bonuses: they instantly go to our politicians :). So it’s not like they are becoming more and more rich.”

Japan dumps thousands of tons of radioactive water into sea

Tons of radioactive water from the Fukushima Daiichi nuclear facility are being dumped into the Pacific Ocean to make space to store highly radioactive water. The water was most likely contaminated while cooling nuclear fuel rods.

FlowinEddie asked, “And this is just OK? Business as usual?” siracco said, “Fish in Japan have now taken a detour into the twilight zone.” lestalk said, “Just think, we were worried about all the plastic bags in the Pacific.”

Some said that it isn’t as bad as it looks. Grandaccess figured, “A ton is 2000 lbs; at 8 lbs per gal: that’s less then 3000 gallons: that’s a drop in the bucket next to the size of the ocean. I am sure there are more companies here in the US that do more damage to our rivers every hour.”

baman agreed, “I'm also an engineer, worked at a nuclear plant for 40 years, held an SRO license, and am now consulting in support of the new generation AP1000 reactors. What CNN did not say is that this is very low level waste. Go look it up on the IAEA website.”

cassieann asked, “So is the solution to the Japanese problem to dump everything into the ocean and thus make it a world problem?” Lenoriarose replied, “Where should they be putting the water? Is it better to dump it in water sources for their people? There aren't a lot of options here.” And bailoutsos said, “Oceans have been the dumping grounds for waste for hundreds of years. Not just one nation is at fault.” And gmoore114 said, “There are 17 naval reactors at the bottom of the sea, fuel and all, from catastrophic events to dumping, mostly soviet. No laws.”

polyrhythms said, “Mankind's two largest sources of energy, oil and nuclear, have caused two of the biggest ecological disasters in history. BP, meet Tokyo Electric. I don't care how 'safe' you make a nuclear plant, if a 9.0 earthquake hits, nothing is safe.

PdxWillisy said, “I am not a socialist but it has become clear that capitalism is too greedy to safely handle nuclear power.” LeeMinChul replied, “What type of government ran the Chernobyl plant again?”

The miracle of the washing machine.

Ahh, the joys of washing laundry in a machine, rather than in a stream or on a washboard! One writer suggests that even though world population is stabilizing, those who do not yet have such labor-saving devices will want them, with a predictable increase in energy demand.

sparky45 said, “Five billion people still striving for a life that includes a washing machine or other 'basics.' That gets you to thinking.”

padre46 said, “Maybe the greatest invention was the electricity used to drive the washing machine; otherwise imagine it being a hand-crank device.” 7veils answered, “Surprise! Many rural areas didn't have electricity so washing machines were hand cranked and some even had a small gas engine to run it.”

Kynt said, “Using a (modern) washing machine or dishwater saves water and energy compared to doing the laundry or dishes by hand, that's why even the greenest of the green use it. What makes the difference is that they're most likely using soap nuts as detergents.”

JeanPSomers said, "If we, in the US, really want to make an impact on energy consumption, maybe we could focus on reducing the usage of the drier. I suspect the energy used to dry a load of clothes is substantially higher than the energy used to wash it.

MannyHMo said, “May I add that a dependable source of water is a must. This means a well, pump, and storage tank as prerequisites. The best dryer in warm climates is an umbrella-shaped pole that I saw in Australia.”