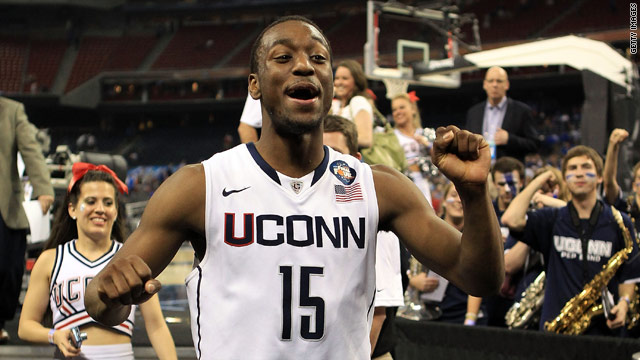 Kemba Walker celebrates Saturday after the UConn Huskies beat the Kentucky Wildcats for a shot at the title.
April 4th, 2011
12:45 PM ET

After weeks of hard-fought battles, stunning upsets and unbelievable Cinderella stories, it all comes down to tonight’s NCAA Tournament championship.

Pitting Brad Stevens-led Butler against UConn, the title matchup rounds out a remarkable tournament that saw the impossible become possible. The Butler Bulldogs will be making their second consecutive title game appearance, after missing a shot in the last seconds against Duke in 2010.

The UConn Huskies will be returning for a shot at the title for the first time since their 2004 national championship. As SI.com’s Luke Winn points out, no matter the outcome, both of these teams have clawed their way to amazing tournament runs.

But despite the incredible skill and determination both teams showed, who is this year’s underdog?

“Despite the fact that the Bulldogs began the season ranked in the AP poll, and UConn did not, and despite the fact that Butler has a roster full of players with title-game experience, and the Huskies do not, Las Vegas had the Bulldogs listed as 3.5-point underdogs late on Saturday night,” Winn writes. “UConn, after all, has Kemba Walker, whom coach Jim Calhoun correctly calls ‘the best player in college basketball,’ and Butler does not.”

The Kemba Factor will certainly be one of the Bulldogs' greatest obstacles to overcome when they take the court in Houston, Texas. Walker has been remarkable during the tournament, never leaving the court during the Huskies’ Final Four battle against Kentucky and scoring 18 points for his team in the process. Walker aside, Butler will look to capitalize on its tactical edge. Removed from the emotions that last year’s championship carried, the team is generally more focused and acclimated to the high pressure of a title game. Will it be enough to deliver them the championship that they came so close to claiming last year?

36 – Number of points UConn player Maya Moore scored in her last game as a Husky. She finished her college career with an astonishing 150-4 record.

99 – Number of races that Dale Earnhardt Jr. has gone without a trip to Victory Lane. He came close this weekend at Martinsville, but lost in the final laps to Kevin Harvick. SI.com’s Bruce Martin talks a wild weekend of racing.