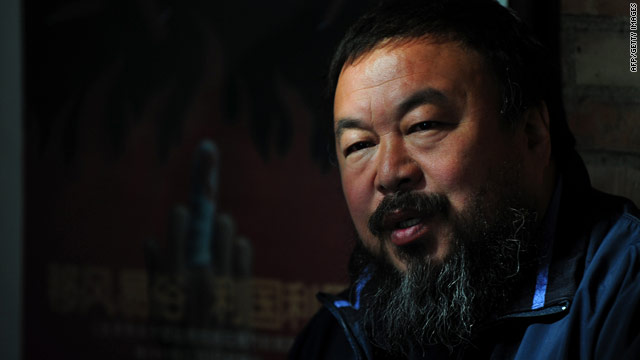 Artist Ai Weiwei was detained by Chinese authorities on Sunday, and he hasn't been seen since.
April 5th, 2011
10:33 AM ET

The well-known Chinese artist has not been seen since he was detained by Chinese authorities on Sunday. Police reportedly confiscated more than 30 computers and hard drives from his home and studio in northern Beijing, in addition to notebooks and other documents. Ai's wife, Lu Qing, said police would not tell her why he was being held and gave no clues to his whereabouts. The 53-year-old artist, who spoke at last month's TED conference, has been an outspoken critic of the Chinese government and has clashed with authorities in the past.

The associate justice of the Massachusetts Appeals Court, who is married to a same-sex partner, was nominated to a seat on the Supreme Judicial Court by Gov. Deval Patrick, The Boston Globe reports. If confirmed, Lenk would be the first openly gay judge on the state's highest court. She would also be the only justice whose marriage is a result of the court's landmark 2003 ruling that made Massachusetts the first state to legalize same-sex marriage.

Preliminary results show that the Haitian musician, known as "Sweet Micky," won nearly 68% of Haiti's presidential vote against Mirlande Manigat, a former first lady and law professor. Before entering politics, Martelly was known for his wild performances, often cross-dressing, wearing diapers, and mooning his audience on stage, The Wall Street Journal reports.Â The father of four was supported in his bid by musician Wyclef Jean and has pledged to supplement his lack of government expertise by bringing in knowledgeable Cabinet members. Barring any legal challenges, Martelly will be confirmed as Haiti's new president by April 16.

The eldest daughter of Amy Chua -Â author ofÂ "Battle Hymn of the Tiger Mother"Â and a lawÂ professor at Yale - was accepted into Harvard and will attend this fall, according to the Above the Law blog. "Tiger Mother," a memoir on parenting released in January, was the center of much controversy, with critics characterizing Chua's parenting style as harsh. The accomplishments of 18-year-old Chua-Rubenfeld are impressive. She played piano at Carnegie Hall at the age of 14 and submitted a well-written article for the New York Post in which she defended her mother's approaching to parenting.

The Yale University hockey player, who was featured as a most intriguing person on CNN.com in June 2010, has died of leukemia at 23, The New York Times reports. AfterÂ Schwartz was diagnosed with leukemia in December 2008, the Yale sports booster site Yalebulldogs.com led a drive to findÂ her a bone marrow donor. After five rounds of chemotherapy, her disease was declared to be in remission and she returned to the ice in January 2010, the Yale Daily News reported. But a biopsy shortly thereafter showed the leukemia had returned, and she halted treatment, according to the Times. She died Sunday.