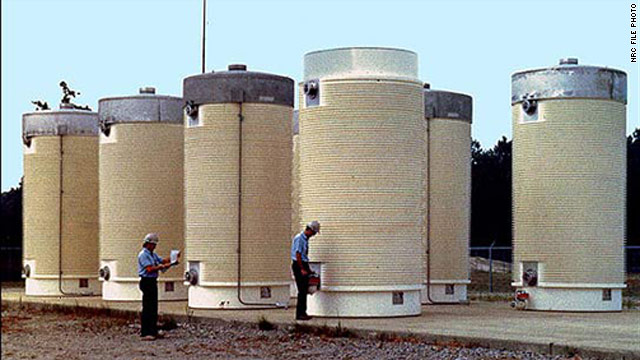 Most of the United States' spent nuclear fuel is stored at nuclear power plants in pools, or in steel-lined casks like these.
April 5th, 2011
08:35 PM ET

What to do with United States' nuclear trash?

Japan's crisis at the Fukushima Daiichi nuclear plant, where the exposure of spent nuclear fuel has contributed to radiation problems there, has highlighted a challenge with nuclear waste: Spent nuclear fuel is never really spent. It remains radioactive and potentially dangerous.

The Japan incident has American politicians advocating to move the United States' nuclear waste, often stored in pools and casks on the grounds of nuclear power plants, away from highly populated areas. And it exposes the fact that the country hasn't come up with a more permanent storage solution.

"Basically, we right now do not really have a long-term strategy" for nuclear waste storage, said UCLA professor Albert Carnesale.

So, what is to be done with the country's 70,000 tons of commercial spent nuclear fuel and the 3,000 additional tons per year that the nation will produce? In 2002, Congress approved Nevada's Yucca Mountain as a site where nuclear fuel would be stored. But after taking office in 2009, President Barack Obama told the Energy Department not to use it.

Obama then created the Blue Ribbon Commission on America's Nuclear Future. The panel, with 15 experts including Carnesale, is studying what to do with spent nuclear fuel.

Click the audio player to hear the rest of the story from CNN Radio's Jim Roope: