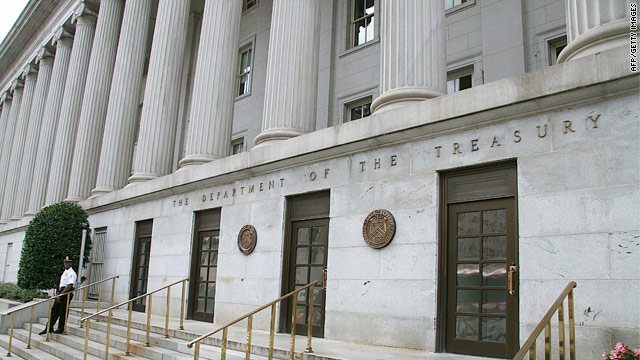 A roundup of the day's business news headlines:

Tech stocks were among the best performers with Cisco leading gainers on the Dow. Shares of financial services companies were also strong, with American Express and JPMorgan both up more than 2%.

After the market closed, shares of Bed Bath & Beyond surged 8% after the homeware retailer reported quarterly earnings and sales that beat analysts expectations.
Gold, silver and oil: The rally is back

Oil, gold and silver have been hitting new highs and experts expect the momentum to continue.

A combination of a weaker dollar, geopolitical turmoil and general fears about inflation will keep commodities elevated for the next several months, say analysts.

For the second day in a row, gold hit a new record high Wednesday, closing at $1,458.50 an ounce, and analysts say the yellow metal could climb over $1,550 an ounce in the near term.

Worries about inflation have reared their ugly head again this week. China's central bank raised interest rates for the fourth time this week, in part to combat the country's own inflationary problems.

The worries were exacerbated by the latest Fed minutes, which showed showed central bank officials at odds about rising prices. That could signal an interest rate hike sooner rather than later.

Unless that happens or the geopolitical situation actually stabilizes, gold prices will probably keep rising, said Carlos Sanchez, a precious metals analyst with the CPM Group.

Treasury prices fell Wednesday as concerns about rising inflation and the outlook for interest rates in Europe and the United States took center stage.

On Thursday, the European Central Bank is expected to raise interest rates - a move aimed at battling long-term inflation. The ECB's potential move would come just days after the People's Bank of China just hiked interest rates for the fourth in time in six months.

The interest rate hikes leave the Federal Reserve as the odd man out. The central bank has kept interest rates near 0% since December 2008 and that's starting to make investors nervous that inflationary pressures may hit sooner rather than later.

"There's some concern about inflation," Williams Capital Group fixed income analyst David Coard said. He said there's also some renewed talk about how much the Fed will stick to its guns when it comes to ending QE2.

QE2 or "quantitative easing" program is the central bank's program aimed at spurring economic growth by flooding the system with liquidity.