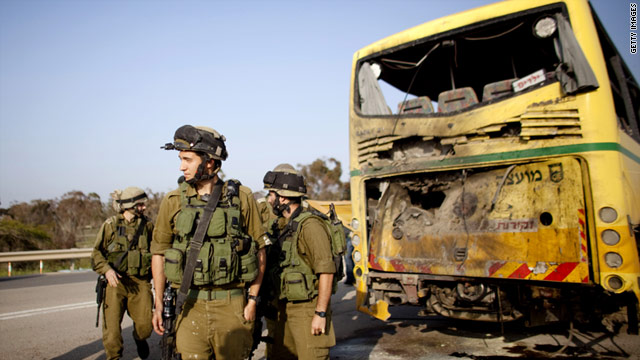 Hamas says it and other Palestinian factions have agreed to stop firing into Israel after Hamas claimed responsibility for shooting a missile that struck an Israeli bus Thursday.

The Hamas strike critically wounded a teenage boy on his way home from school. After not claiming responsibility for the attack earlier in the day, Hamas on Thursday night sent a message to reporters saying the strike was in retaliation for the killing of three Hamas leaders last weekend.

After the attack Thursday, and the firing of numerous mortars into Israel, the Israel Defense Forces "targeted nine terror-activity sites in the Gaza Strip," the IDF said in a news release. A military spokeswoman said later that IDF aircraft targeted three smuggling tunnels in southern Gaza in addition to the nine targets mentioned earlier.

The additional IDF strikes hit shortly after Hamas' cease-fire was scheduled to take effect, according to Hamas' Interior Ministry.

said it will stop after talking with other Palestinian factions following , according to Hamas' Interior Ministry.