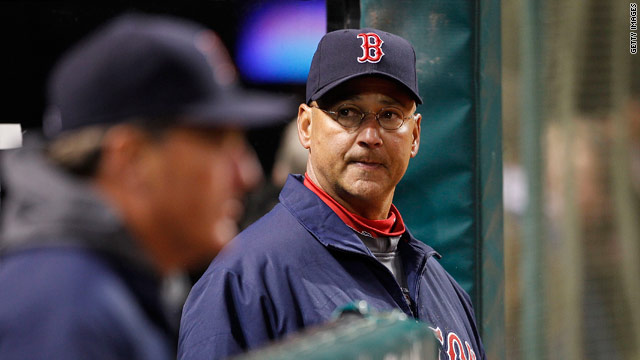 SI.com: Too soon to panic in Boston?

The Red Sox weren't expected to start off their season 0-5. Neither were the Astros. Nor the Rays. But all three are still searching for their first win. Is it time for Boston, Houston and Tampa Bay to start panicking? SI.com's Cliff Corcoran thinks it could be.

"In major league history, which dates to 1871, 110 teams have started a season 0-5. Just two of those 110 went on to make the postseason, less than 2%," Corcoran writes. "Those two teams were the 1974 Pirates and 1995 Reds, both of whom actually started their seasons 0-6. Thirty-nine teams extended their season-opening losing streaks to seven games. Only one of those clubs finished as high as third place."

Not promising stats, particularly for the Red Sox, a team tapped to lead the American League East. But does a sluggish start to a 162-game season really mean much in the grand scheme of things?

Corcoran says that it's not so much the length of the winless streak as the timing. Most teams charge out of the gate, giving fans a glimpse of the strength of their preseason lineup swaps and newly acquired stars, but Boston's early struggle doesn't bode well for the remainder of the season.

The Sox will have another shot to meet their high preseason expectations this afternoon when they take on the Indians at Cleveland.

Minnesota Twins vs. New York Yankees (1:05 p.m. ET) The Twins have gone 7-31 in their last 38 at Yankee Stadium, but they'll be looking to move to 3-3 for this season when the two teams face off in the Bronx.

11 - Number of games freshman Kyrie Irving played for the Blue Devils during the 2010-2011 season. Irving announced that he would be leaving Duke after just one year to enter the NBA draft.

1996 - Last time the Texas Rangers started their season 6-0 before this year. The AL champs nabbed their sixth victory of the season Wednesday with a 7-3 win over the Seattle Mariners.