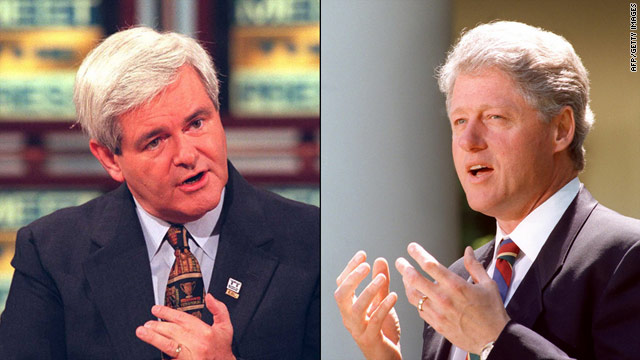 Boosted approval ratings and back pay: Lessons learned from past shutdowns

There's no question that the country can make it through a government shutdown. We've done it before - 17 times since 1977, CNNMoney.com reports. What have we learned from previous shutdowns?

The last two shutdowns occurred on President Bill Clinton's watch, when House Speaker Newt Gingrich and Republicans controlling the Senate clashed with the president over the federal budget.

Most political strategists agree that the Clinton-era shutdowns politically benefited the sitting president, who was able to paint Republicans as obstructionist. According to Gallup, his handling of the shutdown boosted his popularity.

"In the wake of the government shutdown in early 1996, Clinton's approval rating moved permanently above the 50% level, and never fell below 52% after that," Gallup reported in 2001, upon his exit from office.

The same warnings are being echoed by prominent Republicans such as Karl Rove. In his weekly polling memo, the former deputy chief of staff to President George W. Bush cautioned that a shutdown could boost President Barack Obama's approval ratings, citing the Clinton effect.

"The shutdowns helped improve Clinton's political standing, boosting both his approval rating and perceptions of him as a strong leader," Rove wrote. "At the time, poll watchers noted that, 'the only time Clinton's ratings have improved substantially the past year as a result of his actions has been when he adopted a strategy of confrontation.' "

There are other parallels. Like today, the government in 1995 had not settled on a spending measure that would cover the whole fiscal year. Republicans this year were pushing for a deal that would cut spending by $61 billion, but Democrats have wanted only a fraction of that.

Blitzer said that at the time, Gingrich accused the president of being more interested in politics and campaigning, accusations that current House Speaker John Boehner has made against Obama.

Much of the public's outrage over the potential shutdown has focused on loss of pay and benefits for members of the military and their families. Thousands of troops and their families are worried that if the government shuts at midnight, they would receive half a check next week and not see another paycheck until May 1 - if the government shutdown is resolved by then.

Troops got paid in November 1995 because the first shutdown lasted only six days. It also came at a specific time of the month and the shutdown was resolved in time for the next paycheck to be issued in full, officials said.

Past experience also provides some hope. The second, longer shutdown in December 1995 would have meant troops were not paid, but Congress passed an appropriation for defense funding in advance of the second shutdown.

Like then, there's concern for the roughly 800,000 federal employees who stand to be furloughed and lose income. In every previous government shutdown, Congress has authorized back pay for days they didn't work. Of course, there's no guarantee that will happen again. Plus, there may be a double whammy: workers will get their paychecks, but the work they normally do will have piled up in the meantime. When workers return, agencies might have to pay overtime just to catch up on all the work that wasn't done during the shutdown.

As for services that stand to be halted, during the Clinton-era shutdowns, 200,000 passport applications went unprocessed and toxic waste cleanup work at 609 sites stopped. The National Institutes of Health stopped accepting new clinical research patients and services for veterans, including health care, were curtailed. Work on bankruptcy cases could slow. In the last shutdown, more than 3,500 cases were delayed.