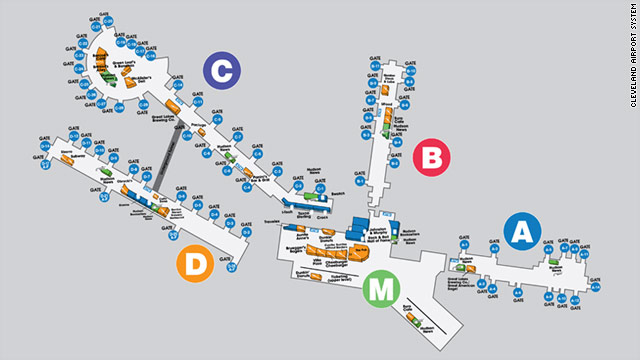 All four concourses of Cleveland Hopkins International Airport had to be evacuated and searched Friday.
April 8th, 2011
01:47 PM ET

TSA officers could not determine who had been properly screened and who had not, so all passengers and carry-ons were removed from planes and the terminal for re-screening, airport spokeswoman Jackie Mayo told CNN affiliate WOIO.

‚ÄúLiterally a dump of the terminal,‚Äù she told CNN affiliate WEWS.

Officers and a bomb-sniffing dog checked all four concourses of the terminal while passengers waited outside in the rain, WEWS reported. The terminal reopened less than 45 minutes after the problem was discovered, Mayo said.

The action was taken "out of an abundance of caution," a TSA statement said.

‚ÄúThat 4:30 to 6, 7 o‚Äôclock in the morning is a really busy time,‚Äù she said. ‚ÄúWe‚Äôve got a lot of people in here who are taking those early-morning flights, those weekend warriors who are going home. So it was a little bit of an inconvenience, but as a precautionary measure it‚Äôs what we do, and what airports across the country do. It‚Äôs all about security, which is our highest priority.‚Äù

The schedule had returned to normal by late morning.

1:56 am ET November 30, 2021 RETWEET
US Secretary of Defense Lloyd Austin has ordered a review of a US airstrike conducted in Syria in 2019 that the Pen‚Ätwitter.com/i/web/status/1‚Ä¶tO
cnni

1:44 am ET November 30, 2021 RETWEET
"There was a telling moment during President Joe Biden's remarks on the new Omicron coronavirus variant at the Whit‚Ätwitter.com/i/web/status/1‚Ä¶3J
cnni

1:20 am ET November 30, 2021 RETWEET
"Nu is too easily confounded with 'new' and Xi was not used because it is a common surname," the World Health Organ‚Ätwitter.com/i/web/status/1‚Ä¶sR
cnni