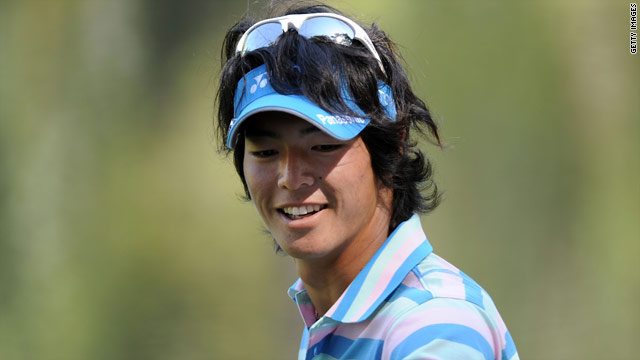 The 19-year-old native of Japan says he will donate all the money he wins on the PGA Tour this year, including this weekend's Masters, to his earthquake- and tsunami-ravaged homeland.

Ishikawa, who shot a 1-under-par 71 in the first round of the Masters, won $2 million last year, according to The Philadelphia Inquirer. He said he hopes to inspire his country by playing well.

"I understand that people, especially in Sendai, they are living in hell, and I would love to show the energy and power of what golf can bring to those people."

The baseball player at Mount Pisgah, a small private school in Johns Creek, Georgia, is turning heads as a relief pitcher with a reported 85-mph fastball.

But it's not the fastball that has people talking. It's the fact that Sandy is a girl, one of just a few across the country playing high school baseball.

"I've seen and coached with a lot of boy pitchers the same age, and she has got just as much or more talent than half of them," Joey Hamilton, a former major-league pitcher and one of Sandy's private coaches, told the Atlanta Journal-Constitution.

"I love baseball; it's my favorite sport and always has been," Almon told the paper. "I don't know how to explain it other to say that baseball just comes natural to me. Other sports, like basketball, are work. Baseball is not that way."

The Sacramento, California, high school senior has achieved an honor few of her peers can match: A school in Liberia has been named for her.

Robbins founded Textbooks for Liberia when she was in eighth grade. The organization has sent more than 10,000 books to the West African nation, CNN affiliate KXTV reports.

In gratitude for her work, officials named a new school in Monrovia, the Liberian capital, for her.

"The school is taking enrollment now and it should be starting in the fall. It's the Casey Robbins International School," said Robbins, who visited the site in February. "It's definitely a cool thing for me. I got to have a picture with the sign for my school."

Robbins said she plans to continue and possibly expand the program while attending Stanford University after graduation.

8:32 am ET April 11, 2021 RETWEET
For any human working or watching the #DerekChauvinTrial it‚Äôs emotionally draining especially if you‚Äôve been folltwitter.com/i/web/status/1‚Ä¶rKl2e8
sarasidnerCNN